Have you written your obituary? Go ahead

These days, obituary has come to mean that formulaic article in the paper written by a family member or funeral home worker and costs money to publish. However, obituary’s older definition is a news story, usually written by a newspaper journalist, about the life of someone who died. Any more, to distinguish between the two, people who work in newspapers say “obituary” to refer to the submitted obits and “feature obituary” to refer to the ones written by the newspaper staff.

For instance, after Michael Jackson died, you probably read many stories about his life. Under the old definition, those were obituaries. The Associated Press, New York Times, USA Today, People and other news organizations have journalists who write feature obituaries on living celebrities who might die soon so that way the copy is ready when the celebrity kicks the bucket. They just have to add the final, end-of-life details.

That teaches you something. Most obits aren’t about death. They are about life.

The same holds true for the submitted obits in this newspaper. Really, only a few words refer to death — the word “died,” the day it happened and the cause of death. A few more lines are for the sake of other people — the funeral, the visitation, the official, the funeral home and the survived-bys and preceded-bys.

What’s more, in this time of submitted obituaries, it allows you to write your obituary before you die, just like the journalists do for celebrities. Think about it. You plan your will. You plan your estate. Why not write most of your obit and let your relatives finish the rest?

Let me give it a shot, following the formula of most obits in our paper:

Timothy Michael Engstrom died (insert date) from (insert cause of death) at (insert place, time and day). He was (insert age).

(Insert paragraph about funeral time, location, official and information about visitation and/or burial.)

Engstrom was born (birthday) at Quonset Point Naval Hospital in North Kingstown, R.I., the son of Teri Engstrom and stepson of Bruce O’Tool. At age 9, he became the stepson of Bruce Frerking.

He graduated from Pomeroy (Iowa) High School in 1989 and participated in football, basketball, golf, band, pep band, jazz band, marching band and FFA. He didn’t go out for track and field until his senior year, but it turned out to be his best sport; he ran the mile and two-mile. He also excelled on the school’s Academic Decathlon team.

After high school, Engstrom joined the U.S. Army for a three-year stint. He came to be a paratrooper in the 82nd Airborne Division and was trained to work with telecommunications. He served in Saudi Arabia and in Iraq in the Persian Gulf War.

He graduated from Kirkwood Community College in Cedar Rapids, Iowa, in 1995. He graduated from Iowa State University in 1997, where he studied journalism and English and could be found working at the Iowa State Daily. He was promoted to editor in chief of the Daily for the summer semester of that year.

Engstrom then began working at the Ames (Iowa) Daily Tribune under the supervision of Pulitzer Prize-winning editor Michael Gartner.

OK, enough about my life. You get the picture. You can tell your story without forcing your relatives to piece it together. It only makes sense. 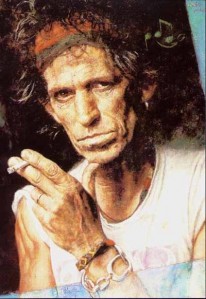 By the way, some submitted obituaries don’t give the cause of death. I dislike that. I have told my beautiful wife and other relatives that I don’t care how embarassing or uncomfortable my death is, I want the cause of death in my obit. The obit is for the readers, not me. I will be dead. It should have cause of death because people want to know. Don’t make them guess. A good obituary tells them. It’s as simple as that.

Passed away in his sleep, hit by a bus, choked on his vomit, killed in a freak boating accident, lost a monthlong battle with an ingrown toenail, decapitated by a flying disc, accidentally drove his beloved Ford Ranger off a bridge and into the Mississippi River while sending a text message, I don’t care. Put the cause of death in the obituary. I insist.

One more thought: If you write your obituary, make sure you don’t live the life of Keith Richards. You probably will have to keep updating it, making it more work than you have time for.

Think about those journalists whose job it is to write copy for celebrity obituaries before they die. They probably have to keep updating the Keith Richards one. He lived a crazy rock-star life as the Rolling Stones guitarist, still smokes coffin nails to this day, and yet still lives. What a remarkable constitution! He keeps making albums, writing books and grabbing headlines.

Perhaps the longevity researchers at the Blue Zones organization in Minneapolis could study him.