In the company of eagles in Alaska

“Everything is nearly copacetic. It finally hit me. I should have hung that ceiling fan higher. Life is not like a box of chocolates. It’s like a jar of hot peppers. What you do one day burns your butt the next.”

“You are philosophical today. Is this the month you wash your dishes?” I say.

“You remember when I took that boating class and got a perfect score?”

“You were the only one to ever get a zero on that course,” I interject.

“OK, let me put it this way. Do you remember that ‘I’d rather be boating’ sticker I have on my truck? I need help peeling it off the bumper.”

“Ah, you’ve discovered that “boat” stands for, “Break Out Another Thousand,” I say. “Or did you realize why your boat is named Swimming Lessons?”

“The other day, I was paddling the kayak around Lake Inferior. I wanted to get in one last day before the lake iced over. It was colder than my mother-in-law’s heart on the water. I lit a fire. It warmed me, but the fire went out when the stupid kayak sank.”

“I hope you learned something from the experience?” I add.

“I learned that you can’t have your kayak and heat it, too.”

The vastness made for vague boundaries.

The shadow of a bald eagle swept over me. It didn’t darken my day. On the contrary, it brightened it.

I was in the company of eagles and eagle watchers gathered near Haines, Alaska, at the Chilkat Bald Eagle Reserve. The convergence of eagles, salmon, people and Chilkat River was extraordinary.

The bald eagle, which embodies the freedom we cherish, has eyes almost as big as mine. There are up to 3,500 eagles that gather along the Chilkat in November to feed on a late run of chum and coho salmon. A confluence of rivers provides reliable open water. The eagles’ large eyes must become even bigger when they see the all-you-can-eat buffet. An eagle’s eyes are said to be four to eight times more acute than a human eye and able to see a fish on the surface of water up to a mile away.

I stood with folks from as far away as France, Japan, Holland, Italy, Australia, Spain, Israel, and England as we attempted to find a single salmon without an eagle attached. Eagles brought people together. It wasn’t all easy for the eagles. They took some verbal abuse from crows, ravens and magpies. 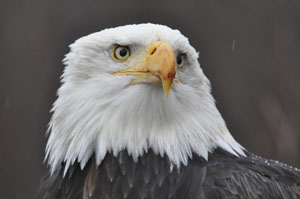 I visited Chilkoot Lake to see the American dipper. Once known as the water ouzel, the dipper is a grayish bird, resembling a robin with a short tail. It forages underwater and on rocks along swift streams to feed on snails, worms, small fish, caddis flies, mayflies, and beetles. The dipper has nasal flaps that prevent water from entering the nostrils, special wing muscle adaptations to help it remain submerged in strong currents, and the ability to produce waterproofing oil to coat its feathers. The dipper points its bill upstream while foraging rather than downstream because its feathers point toward the rear. If the bird were pointed the other way, its feathers would lift from its body, rendering the waterproofing useless and making the bird less hydrodynamic. It’s similar to carrying an opened umbrella in a strong wind. It’s best to point the umbrella into the wind.

John Muir wrote this about the dipper, “His music is that of the streams refined and spiritualized. The deep booming notes of the falls are in it, the thrills of the rapids, the gurgling of margin eddies, the low whispering of level reaches, and the sweet tinkle of separate drops oozing from the ends of mosses and falling into tranquil ponds.”

Chilly water moves the bird to eloquence. The American dipper lives in an environment of constant movement and sound that demands a loud, melodious song to be heard. Its beautiful song is a cross between those of a wren and a thrush.

The dippers often nest behind waterfalls and they do dip (or bob). Only the bird knows why it dips. Some scientists suggest that it is an advertisement to would-be predators that they are fit and agile, and ready to flee if threatened. Others believe it is a technique for locating prey. Refraction bends the light coming from underwater and peering from multiple angles aids in pinpointing prey. It may be that in a noisy streamside environment, dipping acts as a silent communication technique.

I go to Alaska to experience wonder. A rehabilitated eagle was returned to nature. I watched the released eagle fly—first into the river, then onto land where it found a salmon. The freed eagle was a symbol of renewal that rejuvenated even the weariest of souls. An eagle was set free—so were some people. We joined the eagle in flight. Each person who saw the liberated raptor became a poet. I saw tears and felt rain. Disraeli said, “Nature, like man, sometimes weeps for gladness.”

If any day ever won a prize, that day did. I will dream of other days like that one. The bird held my eye for only a moment, but it holds my heart forever.

An eagle can carry me a long way. I saw so many eagles that I wanted to see more.

Despite e-mails to the contrary, eagles do not mate in flight.

The toxic oil spill in Prince William Sound in 1989 killed about 900 eagles. The eagle population in Alaska is approximately 30,000.

There was once a bounty on bald eagles in Alaska — up to $2 was paid for a pair of talons from over 128,000 bald eagles.

A grizzly bear can eat 90 pounds of salmon in a day. Developing young salmon are called alvins.

The sunniest city in the United States is Yuma, Arizona and the cloudiest city is Juneau, Alaska.

“Where there is great love, there are always miracles.” — Willa Cather