Is it to be a recount? 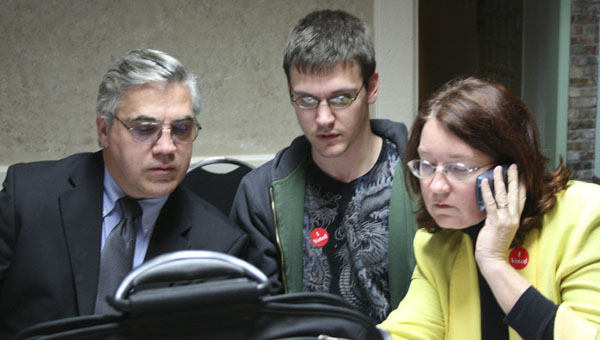 Freeborn County District 27A Rep. Robin said Wednesday she will not waive the automatic recount in her race for re-election against opponent Rich Murray.

That means the recount for this seat will move forward, though the date for it has not yet been scheduled. 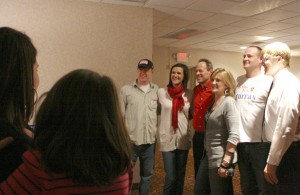 Republican District 27A House candidate Rich Murray poses for pictures with his family Tuesday night after hearing he defeated current Rep. Robin Brown by 58 votes. However, because the race was so close, there will be an automatic recount. — Sarah Stultz/Albert Lea Tribune

The race between Brown, DFL-Moscow Township, and Murray, R-Albert Lea, ended Tuesday night with a margin of victory of less than 0.5 percent — specifically 58 votes in Murray’s favor — thus, the race is subject to an automatic recount by state law. The cutoff for the recount was 75 votes.

Brown said she visited with family and friends Wednesday, who all worked toward her campaign, and they unanimously encouraged her to let the recount process move forward. They commented that there’s a good reason for the automatic recount in races as close as this one, one of which is to ultimately make sure the count is correct.

“Although I did not request it — and would not have requested it — I will not stand in the way of the automatic recount,” Brown said.

She had until Friday to decide whether to submit a written notice to the county’s canvassing board, requesting to waive the request triggered by the close race. 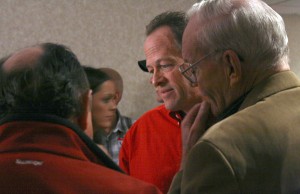 House District 27A candidate Rich Murray looks over election results Tuesday with supporters Keith Fligge and Paul Overgaard. According to Tuesday night's results Murray won the election against incumbent District 27A Rep. Robin Brown, but because the results were so close, there will be an automatic recount. -- Sarah Stultz/Albert Lea Tribune

In the meantime, however, Distad assured that all of the ballots in Freeborn County are under lock and key in an election room. No one is allowed to enter the election room alone; they must enter in pairs.

Freeborn County Republican Party members were taking shifts outside the election rooms in both Freeborn and Mower counties Wednesday where ballots were stored.

One of those members was former Republican legislator Paul Overgaard.

Overgaard said though he has complete confidence in the Freeborn County Auditor-Treasurer’s Office staff and the election process locally, he and others wanted to show they have an interest in what is taking place with the ballots.

Overgaard said the party hoped to have someone on hand at the Auditor’s Treasurer’s Office during business hours until the canvassing of votes Friday.

On Wednesday afternoon, Murray said he and the other members of his party are trying to gather facts and figure out what to do next.

He said while it would be nice if Brown decided to waive the recount, he does not think the vote totals will change much if it does take place.

“The integrity of the system is so strong now; you’re just not going to get much in the way of changes,” Murray said.

He noted that most of the ballots that were cast were counted by voting machines. Election judges try to resolve mistakes on other ballots early on.

“There’s not a lot of chance for error in the numbers that are in there,” Murray said. “I think they’d be surprised if it changed a vote or two.”

He said he is proceeding as if the election is over, noting that this coming weekend he will be caucusing for Republican Party leadership in the Legislature.

“I’m just happy that the election part is over,” Murray said. “I’m just looking forward to the next chapter here.”

Final returns show that Democrat Mark Dayton leads by about 9,000 votes out of 2.1 million cast.