The funeral service for Jerri Ranae Mondeel of Hollandale will be at 2 p.m. Thursday at Grace Lutheran Church, Albert Lea. The Rev. Todd Walsh will officiate. Interment will be in Hillcrest Cemetery. Visitation will be from 4 to 7 p.m. Wednesday at Bonnerup Funeral Service, Albert Lea and one hour before the service at the church. 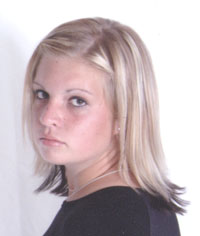 Jerri was born July 22, 1987, in Albert Lea, to Jonathan Henry and Jody Ranae (Sorby) Mondeel and was a lifetime resident of Hollandale. Jerri was a member of Grace Lutheran Church where she was baptized and confirmed. She attended Hollandale Christian School grades kindergarten through fifth, Brookside Middle School, Southwest Junior High, graduated from Albert Lea High School in 2005, and Riverland Community College in 2006. Jerri also attended one year of college at Mankato State and was recently continuing her education with online classes from Rasmusson Business College. She currently was in a dart league and played co-ed volleyball. Softball was the sport she most excelled in and received many honors and awards. She grew up near the Maple Island Ball Park and made her debut there at about one week old. She spent every season watching her dad play, playing, then coaching Little League, and managing a co-ed team with her brother whom she so lovingly referred to as “Boy.” She also played ball in the Glenville league and tournaments. She enjoyed the outdoors, hunting, fishing, boating, camping and especially training her hunting dog Tyson, whom she took everywhere. Jerri also enjoyed spending time with family, friends, and keeping up with Facebook.

Jerri is preceded in death by her grandparents: Jerry and Beulah (Grandma B) Sorby.

Jerri was a wonderful daughter, sister and an all-around good person. We love and miss you, and our hearts are broken forever. Thanks for the 23 years, till we see you again, Rest In Peace, Baby Girl.