A time for remembering and sharing memories of Kelly Jean Johnson will be from 4 to 8 p.m. Thursday at Bonnerup Funeral Service, 2210 E. Main St. Albert Lea. 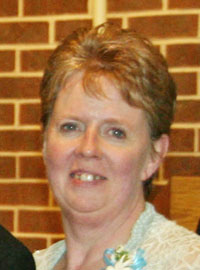 Kelly was born May 13, 1961, in Minneapolis, the daughter of John and Sharon (Birk) Delaney.

Kelly loved camping and was very creative with her scrapbooking and stamping. She also loved collecting antiques.