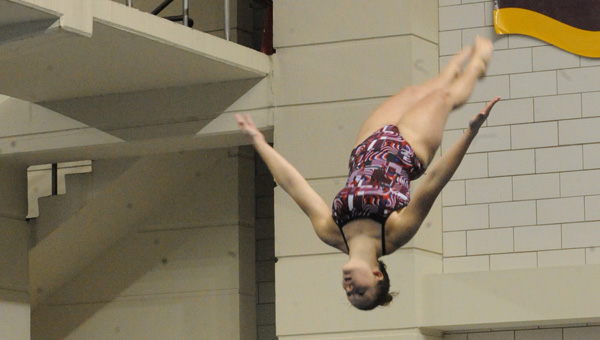 Karli Kriewall dives in the state final at the University of Minnesota Aquatic Center in Minneapolis. -- Andrew Dyrdal

Both athletes were among the youngest to place in their respective events at the University of Minnesota Aquatic Center.

Kriewall stayed idle through the three-dive finals as she was fifth after Thursday’s preliminary round.

“I went out there and did my best,” Kriewall said. “It didn’t go exactly as I wanted it to but I’m happy.”

“She continued to do what she’s been doing all season,” Albert Lea diving coach Jill Johnson said. “She had such a nice performance here at the state tournament and she finished out a fantastic year.”

Kriewall was one of only two non-seniors in the top eight.

Kriewall’s fifth-place finish is the highest an Albert Lea diver has placed in school history, making her arguably the greatest diver the school has ever seen.

“That’s crazy,” Kriewall said of the distinction. “I don’t even know what to say to that.”

She won the consolation final and posted the seventh- best time overall, including the championship final.

Horejsi was the youngest swimmer to finish in the top 16 at state.