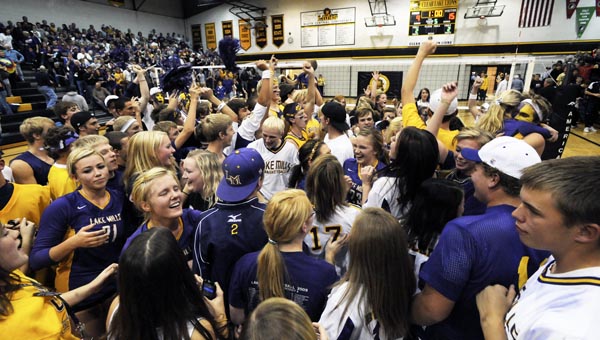 Lake Mills High School students storm the court and celebrate with the Bulldogs volleyball players moments after the team was announced regional champion. The Bulldogs beat Sumner-Fredricksburg 15-9 in the fifth set. -- Andrew Dyrdal

CLEAR LAKE, Iowa — Down 9-6 in the fifth set, Lake Mills head coach Jim Boehmer walked back to bench thinking another Sumner-Fredericksburg point might end his team’s run at a state tournament berth.

Fjelstad served out the match with three aces, and Honsey led an emotional rally with three kills, as the Bulldogs (43-1) scored nine unanswered points to win 3-2 and advance to the Class 2A state tournament.

“It’s just like a dream come true,” Boehmer said. “It’s just unbelievable. I’m so happy for what these girls have done.”

In a packed gym at Clear Lake High School, momentum was key as both teams struggled overcoming the roar of the opposing team’s fans.

The Bulldogs and S-F Cougars opened by the match by exchanging points, and after two kills by Lake Mills’ Josie Brackey, the teams were knotted at 8-8.

After a similar start to the second set, the Bulldogs and Cougars were tied 6-6, but Lake Mills built momentum and and went on a 12-3 run en route to a 25-14 win.

The Cougars cruised two a 25-19 win in the third set and the Bulldogs faced elimination, needing to win the next two sets to keep its season alive.

The Bulldogs will face Pella Christian at 7:30 p.m. on Nov. 11 in the Class 2A quarterfinals at US Cellular Center in Cedar Rapids, Iowa.

The Cougars opened up the fourth set with a 3-0 lead but the Bulldogs slowly crept back and took a 6-5 lead that they never relinquished.

The Cougars closed the Bulldogs’ lead to 21-19 late in the fourth set, but kills by Amanda Lampman, Honsey and Brackey sealed a 25-20 win and forced a fifth set.

Brackey opened the final set with a kill, and a Lampman kill two serves later put the Bulldogs ahead 2-1.

The teams exchanged points and were tied 5-5 before the Cougars opened up a 9-6 lead and forced Boehmer to call timeout. 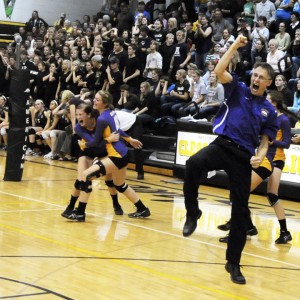 Out of the break, Fjelstad served eight straight points and the Cougars returned a ball into the net, sealing the Bulldogs win as the gym erupted in purple and gold.

“We love what we’re doing, so why would we want to quit?” Boehmer said. “We haven’t just talked about ‘let’s get to (state) and then all is well.’ You’ve got to love the fact that the girls believe that they can play with anybody.”

Fjelstad led the Bulldogs with four aces on 25-for-25 serving. She also led all players with 50 assists.

Brackey also had four aces on 16-for-16 serving, with 16 kills and a team-high 12 digs. Lampman led the Bulldogs with 17 kills.

The Bulldogs will face Pella Christian at 7:30 p.m. on Nov. 11 in the Class 2A quarterfinals at US Cellular Center in Cedar Rapids, Iowa.