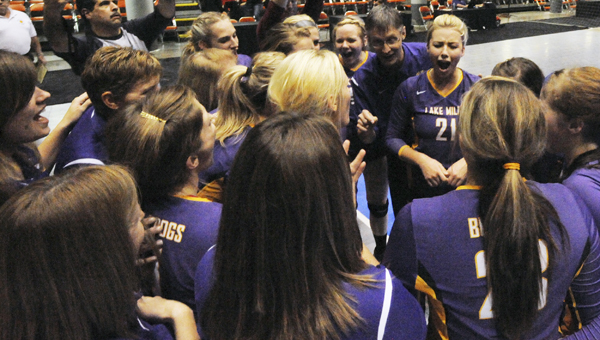 CEDAR RAPIDS, Iowa — The Lake Mills Bulldogs volleyball team has made a habit of starting slow and finishing strong this postseason. That’s OK with head coach Jim Boehmer as long as they keep winning.

It was no different Thursday as the Bulldogs overcame deficits in two sets to sweep the Pella Christian Eagles 3-0 in the Class 2A state quarterfinals at the U.S. Cellular Center in Cedar Rapids, Iowa. 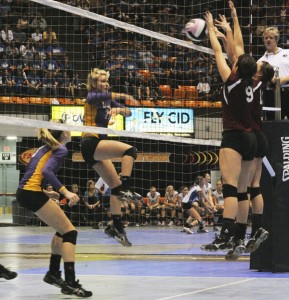 Josie Brackey attempts a kill during the first set of a win over Pella Christian at the U.S. Cellular Center in Cedar Rapids, Iowa. -- Andrew Dyrdal/Albert Lea Tribune

“The whole year the girls have had an uncanny faith,” Boehmer said. “They really have never panicked. The girls just find a way to crawl back.”

Josie Brackey led the team with 11 kills and 13 digs as the Bulldogs extended their win-streak to 27 matches.

“We studied their defense a lot and we knew what they hit,” Brackey said. “We played our game.”

In the first state tournament match for every player on the Lake Mills’ roster, butterflies held the Bulldogs to a slow start against a more experienced Eagles (26-12) team.

It showed as the Bulldogs struggled with serve receive and found themselves in a 6-2 hole early in the first set.

Down 11-10, Morgan Fjelstad served five straight points to give the Bulldogs a 15-10 lead and force an Eagles timeout. 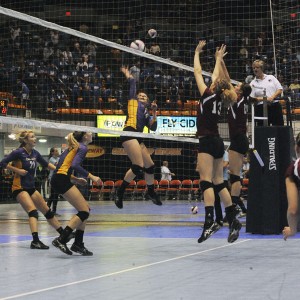 Lake Mills’ Shelby Kuper attempts a kill Thursday during the first set of a 3-0 win over Pella Christian in the Class 2A state tournament quarterfinals in Cedar Rapids, Iowa. -- Andrew Dyrdal/Albert Lea Tribune

The teams exchanged points and the Bulldogs held a 24-20 lead before the Eagles rattled off three straight points forcing a Bulldogs timeout.

The Eagles’ Ranae De Bruin couldn’t make it four straight, though, and hit the ensuing serve into the net, giving the Bulldogs the opening set.

The Eagles got off to an even hotter start in the second set, holding leads of 6-2, 10-5 and 14-7 before a Brackey kill and five straight service points from Haley Mathews pulled the Bulldogs within 14-13.

The Eagles once again extended their lead to 18-16, but the Bulldogs closed the set on an 8-2 run and went up 2-0 on a kill from Shelby Kuper.

The Bulldogs looked determined to win in three sets and not let the Eagles force a fourth as they led the entire third set — except for an 18-18 tie — and won 25-22 to advance to the semifinals against the Mediapolis Bullettes (43-3).

“We’ve been ahead 2-0 before and lost,” Boehmer said. “We know what that’s like and it can happen at anytime.”

After the 18-18 tie in the third set, Kuper and Amanda Lampman combined for four kills in the next five points, putting the Bulldogs into position to win the match. Brackey sealed it with a kill on match point.

Boehmer said he wasn’t surprised the Bulldogs swept the Eagles, who have been to the state tournament the past three seasons.

“I believe in the team, I really do,” he said. “The girls were well prepared and the coaching staff was well prepared. You never know how to judge a (sweep) but the girls really controlled the tempo.”

Lampman and Lindy Pins each had eight kills, while Abbey Honsey and Kuper chipped in six apiece.

Fjelstad had 35 assists while going 21-for-22 from the service line with a game-high three aces.

The Bulldogs-Bullettes semifinal match is at 7:30 p.m. tonight at the U.S. Cellular Center.