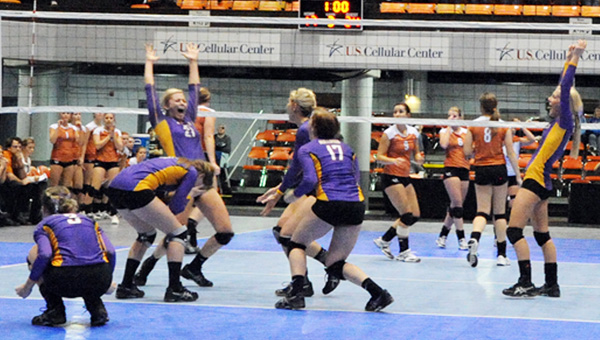 CEDAR RAPIDS, Iowa — Who are they? Lake Mills.

That was the answer to a chant the Lake Mills volleyball players and fans shouted together Friday after the Bulldogs swept the Mediapolis Bullettes in a Class 2A semifinal match at the U.S. Cellular Center in Cedar Rapids, Iowa.

“We have pride in our community,” Lake Mills head coach Jim Boehmer said. “You find things in rural Iowa that you get a sense of pride about and this is a group of fighters. They play hard, they love to win and they’re proud of where they’re from.”

The Bulldogs beat the Bullettes 25-21, 28-26, 25-17 to earn a spot in their first-ever state title match against No. 1-ranked Western Christian. Just getting there has Boehmer on cloud nine. 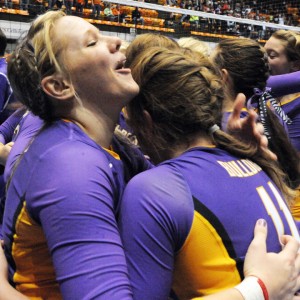 In what the Bullettes coaches called possibly best defensive effort they’ve ever seen, the Bulldogs rallied from down 20-17 to win the first set and battled through five Bullettes’ set points to stun Mediapolis in the second.

“We are finding ways to come back and win,” Boehmer said. “They just battle and battle and here we are in the state finals. It’s just the greatest feeling ever.”

With the third set lead, the Bulldogs never relented as each player on the court spent time face down on the floor diving for loose balls.

There were no stopping the fans either, as the crowd noise enveloped the court until the 25th point of the third set.

“We packed the stands and the people have really embraced these girls,” Boehmer said. “We had two charter buses come down last night and we had two turn around and come back today.”

The Bulldogs received another big night from junior outside hitter Josie Brackey who had a game-high 17 kills to go along with 13 digs and a perfect serving performance. 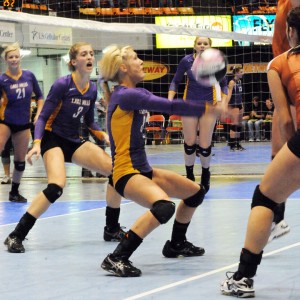 “Josie played excellent,” Boehmer said. “She was on her game defensively and offensively.”

Through the semifinals, Brackey leads all players in the Class 2A tournament with 4.67 kills per game.

Morgan Fjelstad, Amanda Lampman and Kuper also impressed, as Kuper had 11 kills off the bench.

“This may have been Shelby’s best offensive match of the year,” Boehmer said. “She really stepped up tonight and is getting better every match.”

Fjelstad had 37 assists and leads the class with an average of 12 per game in the tournament.

Now the Bulldogs face the No. 1 team in the state, the Western Christian Wolfpack, who beat Grundy Center 3-1 in the semifinals.

This is the Wolfpack’s 10th consecutive, 28th overall, trip to the state tournament. They’ve reached the title match nine of the past 11 years and return two starters from last year’s team that reached the state semifinals.

“They’re really powerful,” said Boehmer, of the Wolfpack. “They play hard, they serve aggressive and they dig up balls. We’re going to have to block as well as we ever have to even stand a chance to score. It’s the state finals and I’m not going to tell the girls any different.” 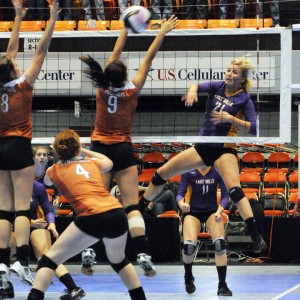 Lake Mills' Josie Brackey attempts a kill during the second set of the Bulldogs Class 2A semifinals match against Mediapolis. -- Andrew Dyrdal