Medium Business of the Year 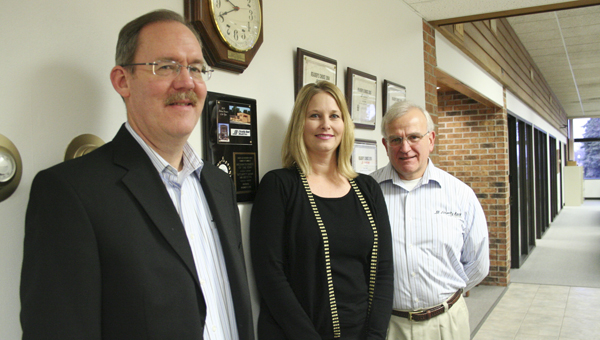 Local decisions made by local owners.

At Security Bank Minnesota, local ownership means that all of the bank’s decisions are not made in some far off place. 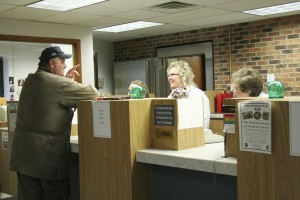 “Because we’re owned locally, we have the freedom to be very community-oriented,” said Julie Claussen, assistant vice president at Security Bank Minnesota.

And it’s the bank’s forward thinking with community in mind that earned Security Bank Minnesota the first-ever Medium Business of the Year award Nov. 11 at the annual Albert Lea-Freeborn County Chamber of Commerce Membership Celebration. The business organization also handed out awards for Large Business of he Year and Small Business of the Year.

According to Randy Kehr, executive director of the chamber, Security Bank Minnesota received its award for many reasons, including community and chamber support along with excellent customer service.

“Their emphasis on customer service is well-known,” said Kehr. “Their employees have over 400 years of combined experience in their field.”

“We’re quite honored and pretty excited to receive this award,” said Claussen. “Without our customers, we wouldn’t be here.”

Security Bank Minnesota was originally chartered in 1906 as Manchester State Bank. In 1946, the Lund family purchased the bank and moved it from Manchester to its current location at 437 Bridge Ave., Albert Lea.

It then operated as Security State Bank before switching to Security Bank Minnesota about 25 years ago. 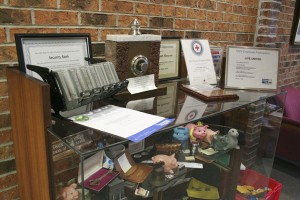 A display case of bank memorabilia in the waiting area at Security Bank Minnesota is topped with several community recognition certificates it has received over the years. -- Michelle Haacke/Albert Lea Tribune

According to Tim Lenhart, president and CEO of Security Bank Minnesota, the employees gained majority of the ownership about five years ago, thanks to an employee stock ownership plan. The employee ownership results in an emphasis on customer service and community service.

“Nobody wants to go to a business where they don’t like the customer service,” Lenhart said. “They go to places where they like the people and the service is good. This recognition shows us as a strong organization that’s doing things right.”

Currently, the main location in Albert Lea has about 25 employees, with four more at the bank’s lone branch in Emmons.

The bank has been a long-term member of the Albert Lea-Freeborn County Chamber of Commerce, dating back to 1975.

Over the years, bank employees have been involved with participation and monetary support to United Way, the Family Y, the Albert Lea School District, Relay for Life, Naeve Health Care Foundation, American Red Cross, Kiwanis International, Festival of Bands and Home for the Holidays, just to name a few.

“We do a lot of donations that people don’t even realize, with high school events and other projects around town,” Lenhart said.

About a week ago, the bank made a donation to the Freeborn County Humane Society. One of the bank’s board members set up a matching fund account to help the organization recover $150,000 lost in an escrow account when Albert Lea Abstract Co. ran into legal troubles in June.

Putting best business practices into their day-to-day routines, along with continuing to upgrade their facilities, were additional reasons the bank received the award, Kehr noted. In recent years, the bank building has made changes to the drive-up and walk-up, along with ATMs at its facilities and at Northbridge Mall. Illuminated bank signs along with new flooring, workstations and landscaping have kept the ambiance fresh, as well.

Kehr said the bank also received the award for its continued support of the Freeborn County Fair.

Lenhart said the booth has become one of the major focus points on the bank’s community service.

“It really gives us a chance to connect with the community — bank members and nonmembers,” he said.

This was the first year the chamber gave out a Medium Business of the Year award. Kehr said the new category was created to level the playing field.

Kehr said that more than 60 percent of chamber businesses have fewer than 50 employees, and by previous standards, any business with over 10 employees was considered a large business.

“The board felt that this was not really fair in that a business of 20 employees would go up against one of 500,” he said.

He said that by changing the rules to small (fewer than 15 employees), medium (16 to 39 employees), and large (40-plus employees) offered businesses more opportunities to be recognized for their work.