Commander Raymond R. Delgado, a native of Hollandale, was relieved as commanding officer of Fleet Survey Team by Commander Christopher Sterbis in a ceremony held Sept. 3 at the John C. Stennis Space Center in Mississippi.

Delgado entered the U.S. Navy in 1986 and was selected as part of the Broadened Opportunity for Officer Selection and Training program in 1987, earning a navy reserve officer training corps scholarship. His previous duty stations include serving as command duty officer and assistant to the operations officer at Fleet Numerical Meteorology and Oceanography Center, serving as Meteorology and Oceanography division officer on USS New Orleans, earning a Surface Warfare Officer qualification, completing a western Pacific and Indian ocean deployment, serving as officer in charge of Fleet Survey Team Division, serving as METOC officer, navigator and group scheduler aboard USS Enterprise and a deployment onboard USS Anzio. 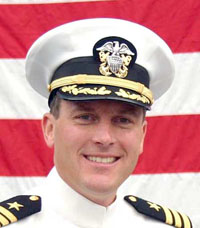 In 1999, he earned dual master’s degrees in meteorology and physical oceanography at the Naval Postgraduate School, in Monterey, Calif. He then went on to serve overseas in Rota, Spain, as the fleet liaison officer at the naval European Meteorology and Oceanography Center until 2001. He later earned a master’s degree in hydrographic science from the University of Southern Mississippi in 2002.

In 2005, he reported as executive officer to the newly-commissioned Fleet Survey Team command. Two years later he was assigned to the Naval Meteorology and Oceanography Command staff where he served as plans, exercises and theater security cooperation officer. In September 2008, he assumed command of Fleet Survey Team.

He is the son of Dick Delgado of Hollandale. He is married to LaDonna Pillsbury of Farmington, Maine, and has two daughters, Cora and Faith.