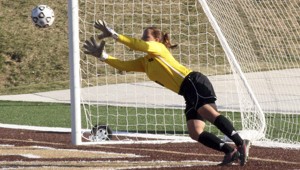 Kendra Olchefske dives to save a ball early this fall for the Mustangs women’s soccer team. -- Courtest of Southwest Minnesota State University

Athletic Conference third team for her role as the SMSU Mustangs soccer team’s goalkeeper, according to a press release issued by the school.

The former Tigers goalkeeper finished the season with 139 saves and averaged 7.6 saves per game throughout her three-year career. Olfchefske also finished her career with 357 saves, which ranks third all-time.

Olchefske was a four-year letterwinner and three-time Big Nine All-Conference performer for the Tigers.

She was named to the state all-tournament team and was a three-time team MVP.