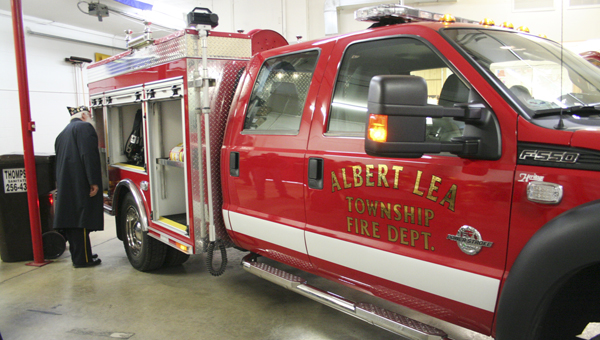 Red and blue lights lit up the Albert Lea Township Fire Department on Saturday, but not because of an emergency.

Firefighters were showing off the department’s new equipment, including a new fire vehicle, to members of the general public at a celebration open house.

Over the past year, the department has received two federal Assistance to Firefighters grants totaling $200,000.

The second grant, totaling $80,000, was used for new equipment, turnout gear and toward remodeling the kitchen and utility room.

Members of the fire department also chipped in to remodel the kitchen area and add a utility room for a new washing machine to clean the turnout gear.

“We did all of the remodeling work ourselves,” said Czaplewski. “We volunteered our time and talents to save money in the township budget.”

Czaplewski said it’s the first time he’s written grants for the fire department and was “ecstatic” when he found out about the awards.

“We’ve never received grants in the past,” he said. “The federal guy said hardly anybody ever gets two grants in one year.”

The Albert Lea Township Fire Department is at 712 East Main St., Albert Lea, across from McDonald’s.

The department has responded to 51 emergency calls this year, with 10 of those being fires.

“Most were medical calls or for accidents,” said Karl.

“We all try to work together, which is a benefit for us because of cost savings and manpower,” said Czaplewski.

He appreciates the understanding that the department’s family members shows to the firefighters.

“It’s a huge commitment on an individual, with first responders training and firefighter training,” he said. “The family’s gotta have this understanding, and most are very good about it.”

The department is looking to donate some of its older equipment to other fire departments.