Funeral services for Patricia Marie Radke, 66, of Albert Lea will be held at 1:30 p.m. Friday at Bayview/Freeborn Funeral Chapel. The Rev. Kent Otterman will officiate. Interment will be at the Hillcrest Cemetery. Visitation will be from 4 to 7 p.m. Thursday at Bayview/Freeborn Funeral Home and one hour prior to the service. To sign the guest book, go to www.bayviewfuneral.com. 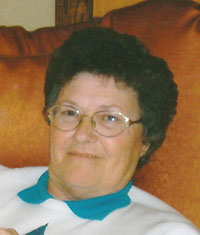 Patricia Marie Radke was born on Oct. 2, 1944, to Melvin and Helen (Puckett) Rippentrop in Faribault County. She grew up in the Kiester, Bricelyn and Albert Lea area. Pat attended Kiester and Bricelyn schools. On June 30, 1962, she was united in marriage to Ronald Radke in Mason City, Iowa. Pat was a homemaker and loving wife, mother, grandmother and great-grandmother. She enjoyed going to St. Croix as a campground host for the summer and Pat loved spending time with her family and friends. Her favorite past-times were cooking, camping, going to the casinos and walking everyday with her friends. She will be deeply missed by all who knew and loved her.