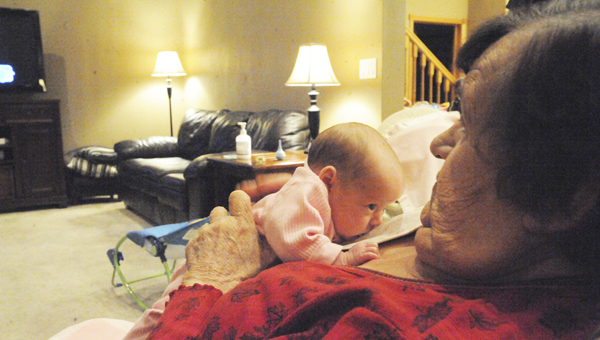 GENEVA —Ashley and Travis Broskoff consider themselves pretty lucky because despite having four infants and a 4-year old, their house is relatively quiet.

The children’s grandma and great-grandma are often over, helping change diapers and rock babies to sleep. Ashley calls them her “volunteers,” and they, along with friends, are making the new family of seven’s lives a whole lot easier. 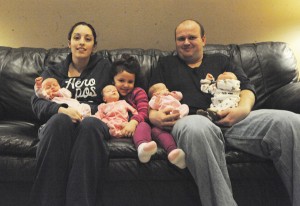 Ashley, 24, gave birth to quadruplets on Sept. 28 in Rochester — three girls and then a boy, born in that order.

The newborns were eight weeks premature and Ashley had a C-section, as doctors did what they felt necessary for her health, according to Ashley. She admitted herself to the hospital a week prior to the scheduled C-section because she needed fluids.

Two newborns stayed at the hospital until Nov. 4 while the other two went home to Geneva three days later to meet their big sister, Presley, 4.

“She loves them,” Ashley said, of Presley. “I think initially she thought they would be 4-year-olds just like her and play in her blanket. She understands there are a lot of babies here.”

Presley has a baby of her own, a doll that she rocks in empty cradles. She jumps at any chance to hold, feed or burp the real babies, though.

The quadruplets were all born within eight minutes and named A, B, C and D for the first week of their lives.

Ashley and Travis, 28, didn’t want to name them until they got home and saw them interacting with one another. They wanted to get to know their personalities. 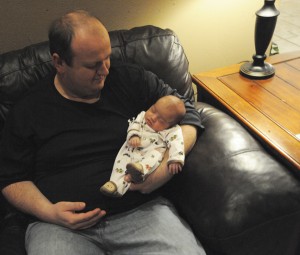 Travis Broskoff holds Shay, the family’s only son, on a couch in his living room. Shay was the final quadruplet born and heaviest at 4 pounds, 2 ounces. -- Andrew Dyrdal/Albert Lea Tribune

“We had a list of names we just had to match them up with a face,” Ashley said.

They were eventually named, in birth order: Hattie, Raegan, Lia and Shay.

The Broskoffs said that Hattie and Shay are independent and love to sleep, Raegan is needy and loves to be held and that Lia is the most laidback.

Before Ashley became pregnant, the Broskoffs planned to have one more child if it had been a boy and try for a third if it had been a girl. They had no plans to have four more kids and were shocked to hear in March that Ashley was nine weeks pregnant with quadruplets.

“We didn’t know what to think or prepare for,” Ashley said. “We went out to supper after we found out and weren’t hungry. We just stared at our food.”

They began looking for a different, larger vehicle and bought diapers while Ashley was still working.

“We got a collaboration of cribs, baby things and anything we could find,” Ashley said. “We did a lot of garage saling.”

The Broskoffs also bought Travis’ parents house, a larger house on the same street to accommodate the family of seven.

“There isn’t a lot you can do because you don’t know what you’ll really need,” Travis said.

The Broskoffs said some of the biggest changes have come in their personal lives. They’re homebound, Travis gave up pool league and the family won’t be going camping — one of their biggest hobbies — anytime soon.

They’re also needing to spend more on less income and Ashley said the biggest expenses have been diapers and clothes.

Ashley said she doesn’t dress the girls alike now but plans to when they get older.