Roger LeRoy Hanson, 81, of Kiester, died peacefully at his home on Saturday, Nov. 27, 2010, surrounded by his family, following a long battle with parkinson’s and heart disease. 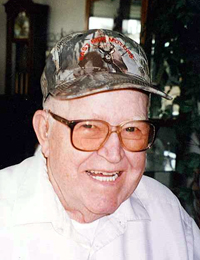 In lieu of flowers, memorials to Crossroads Community Hospice in Albert Lea are preferred.

Roger was born June 18, 1929, at the parental home of Helmer and Julia Hanson in Worth County, Iowa. He was the youngest of five children. Roger graduated from Lake Mills High School in 1947, following which, he served as a member of the 133rd Infantry for the Iowa National Guard from 1947 to 1955.

On July 2, 1955, Roger was united in marriage with Joycelyn Bogenschutz at Salem Lutheran Church in Lake Mills, Iowa, and the couple was blessed with four children. Roger was employed by Queen manufacturing company in Albert Lea, from 1950 to 1960, then he owned and operated the Marigold Quality Check milk route in Kiester from 1960 to 1965. In June of 1965, Roger purchased the Kiester Hardware Store, operating under Farwell OK Hardware then Trustworthy Hardware for 31 years. Roger also operated an LP delivery business for 25 years.

He was a charter member of the Kiester Ambulance for 26 years and served on a number of committees that included church council for St. Paul’s Lutheran Church and Our Savior’s Lutheran Church, Kiester Chamber of Commerce and various volunteer organizations. Roger enjoyed fishing, bowling, woodworking, watching sports and playing cribbage. He loved to spend time with his family and friends.