Ronald Lau, 47, of Larsen, Wis., passed away unexpectedly on Friday, Oct. 29, 2010. Ron was born on May 27, 1963, in Albert Lea, to Archie and Lois (Flatness) Lau. He was a member of the Albert Lea 4-H for many years. He married Lisa Ludlow on May 13, 2007, in the Helmer Myre State Park in Albert Lea. He loved the outdoors, being outside and bonfires, his passion was just getting lost and exploring the woods, which led him to travel to many of the state parks. Ron also enjoyed working, especially farm work and he was currently working at Awesome Buck Adventures. He was also a competitive archer and enjoyed archery. Most of all, Ron loved his family and his grandchildren were his life. 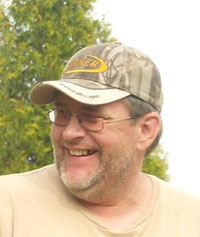 Ron was preceded in death by his aunts: Madeline Hultzier and Donna Flatness; and his uncles: Richard Flatness, Kenny Houg and Virgil Lau.

“He was a wonderful Dad and will be truly missed,” his son Keith said.