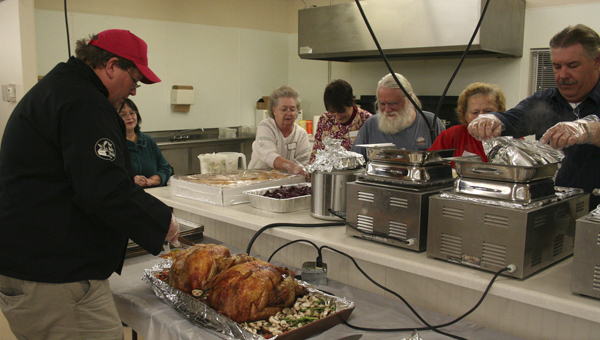 A winter weather advisory with freezing rains and chilling temperatures wasn’t enough to stop the Salvation Army from feeding about 270 people Wednesday evening during a community dinner. 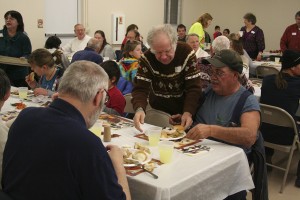 Volunteers start to pass out plates of food Wednesday evening at the Salvation Army’s community dinner. Volunteers hoped to get about 500 people served this year, though the wintry weather dampened their efforts. -- Kelli Lageson/Albert Lea Tribune

Lee Brickson, captain of the Salvation Army, said they weren’t canceling even though some volunteers couldn’t make it and people were trickling in slower than last year’s event.

She also mentioned she thought some people would come to the dinner if they had decided not to travel to be with relatives. Besides, they already had all that food made.

Ron Meyer, who was in charge of preparing the food, started getting ready last week. He prepared 32 turkeys, 400 pounds of mashed potatoes were donated by Mrs. Gerry’s Kitchen, 30 jumbo cans of green beans were prepared along with large amounts of stuffing, gravy, buns and other vegetables. There were also 500 servings of pumpkin pie prepared. 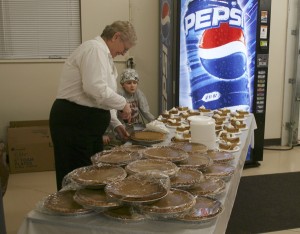 Before the serving started at 5 p.m., Brickson blessed the meal and thanked everyone who was present for attending. The serving lasted until 7 p.m.

“This is a great time of friendship, fellowship and food,” Brickson told the crowd.

Brickson expected more people than last year’s dinner, which served about 450. She said the need has gone up in Freeborn County, and they were expecting about 500 people at the dinner. About 270 made it to the dinner.

She said she hoped everyone in the community felt welcome to come, because it wasn’t just a free meal for those in need. Brickson said the point is that many people in the community can come and those who are in need blend in with the crowd.

She said if there was leftover food they planned to freeze it and serve it at meal sites, and nothing will go to waste. One volunteer, Anna Godeke, heard about helping at the dinner from her church group at Hollandale Reform Church.

“It’s interesting talking to the people who are here,” Godeke said.

Salvation Army Youth Director Lori Miles said this is the second year the event was held at the Fairland Building at the Freeborn County Fairgrounds. The event had previously been held at the Salvation Army building on Court Street, but it wasn’t handicap-accessible or large enough. She said many people came with their families and people came alone as well.