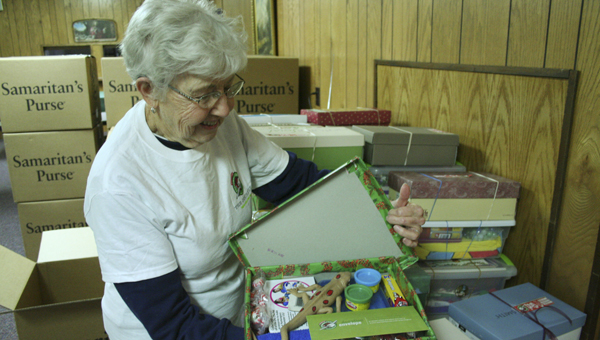 The Christmas spirit is bursting — in the form of shoeboxes — already in Albert Lea. 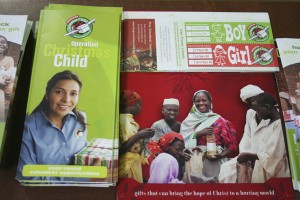 “Every box shows God’s love for children,” said volunteer Wanda Shuldes. “And these are all distributed with that goal in mind.”

Operation Christmas Child was started in 1993 by Samaritan’s Purse. Every year, the organization sends shoebox gifts to children across the nation and all over the world who are suffering from natural disaster, war, terrorism, disease, famine and poverty.

First Baptist Church has helped fill shoeboxes for the past five years, but this is the first year it is serving as a collection site. 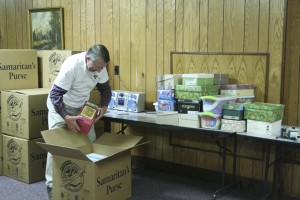 “We always had to take them to Austin before, so this is much more convenient,” she said.

Eleanor Iverson, a volunteer with Oakland Lutheran Church in rural Albert Lea, began collecting shoeboxes for the project about a month ago. She delivered 85 boxes to the local collection site on Monday.

Iverson said it wasn’t difficult convincing parishioners at Oakland Lutheran Church to give to the cause.

“These kids don’t have any other Christmas gifts, and these might be the first gifts they’ve ever gotten,” she said. “You just have to imagine the grin on these children’s faces as they’re handed a box.”

First Baptist Church has 700 large boxes to fill with gift-filled shoeboxes. Based on donations collected the first couple of days, however, organizer Rosemary Olson doesn’t expect this to be a problem.

“It’s just amazing,” she said. “I think a lot of people tend to give locally and to do this. You know it’s going to a good place whether it’s local or worldwide.” 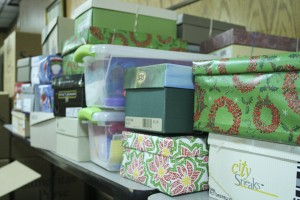 Gifts are being accepted for children ages 2 to 14.

Liquids, chocolate and toys related to war are not allowed.

Anyone donating a box should also include $7 shipping costs inside.

Olson invites everyone to donate, and said the church has plenty of shoe boxes, as well, for those who need boxes to fill.

When boxes are collected at First Baptist Church, donors must fill out a slip of paper that will be attached to each box, identifying whether the box is for a boy or a girl and which age group it belongs in. Boxes should not be sealed shut with tape, but with a rubber band.

After the collection is completed in Albert Lea, First Baptist Church will deliver all of the boxes to Rochester. From there, boxes will be shipped to a processing center in the Twin Cities before being shipped to an even larger collection site in the U.S. From there, the gift-filled shoeboxes will be hand-delivered to children in need across the nation and around the world.