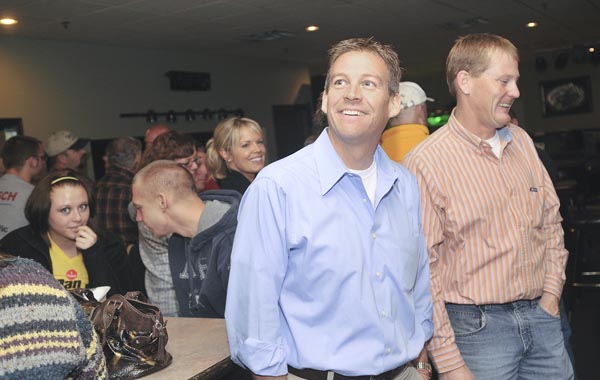 Incumbent state Sen. Dan Sparks, a DFLer, came out on top Tuesday against Republican Kathy Green for what will be his third term in office.

Both are from Austin.

According to election results, Sparks received 61.4 percent of all votes across Freeborn, Mower and Fillmore counties, while Green received 38.5 percent of votes. There were 23 write-in votes.

Sparks, 42, was first elected to the state Senate in 2002 and was re-elected in 2006. During his campaign for re-election he called himself a strong independent voice, pointing out that since he’s been in office he has been a part of 100 bills that came from bipartisan support.

During an interview with the Tribune prior to the election, Sparks said he recognizes that his decisions affect not only voters, but his own family and friends also.

He was unable to be reached for comment Tuesday after the final results were announced.

Green, 53, who has served on the Austin school board for 11 years, said it has been her automatic recounts.

Even with the governor’s race unresolved between Democrat Mark Dayton and Republican Tom Emmer, the party shift in the Legislature clears the way for bills long bottled up, such as racetrack gambling, a photo identification requirement at the polls and a constitutional amendment banning gay marriage. Republicans are also expected to take a new approach toward health and welfare spending.

It was a brutal night for Democrats, who saw some of their stalwarts go down.

Rep. Loren Solberg, a 28-year House veteran who heads the powerful Ways and Means Committee, was fighting Republican Carol McElfatrick in a race that was too close to call Wednesday morning. Contests in St. Cloud, Northfield and Albert Lea were within the margin of an automatic recount.

Also on the chopping block: three Woodbury-area lawmakers who swept in together with a Democratic surge in 2006 — Sen. Kathy Saltzman and Reps. Julie Bunn and Marsha Swails. Republicans overturned Democrats throughout the Twin Cities suburbs and in Rochester, northwestern Minnesota and the central part of the state.

“The two biggest issues obviously were the economy and our state budget,” said Republican Sen.-elect Roger Chamberlain, who defeated Democrat Sandy Rummel in the northeastern suburbs. “The state budget here is simply busted, and people understood that.”

Republicans will control the Senate 37-30. They have never controlled the chamber under the GOP banner. They were called “conservatives” the last time they ruled the Senate in 1972.

The GOP House majority will be at least the minimum 68 seats, perhaps as many as 72 seats.

All 201 legislative seats were on the ballot, but a couple dozen races were key to the GOP gains. Republicans ran aggressive challengers as they tried to bring national discontent home to legislative races. Democrats were on the defensive as they tried to hang onto large majorities with members in swing districts that went the other way this time.

The party that controls the Legislature will decide what to do on state taxes, determining how far the new governor gets with his agenda. Legislative majorities will confront a projected $6 billion deficit, address a push for a new Minnesota Vikings stadium and redraw political boundaries before the 2012 election.