The insurance comes through 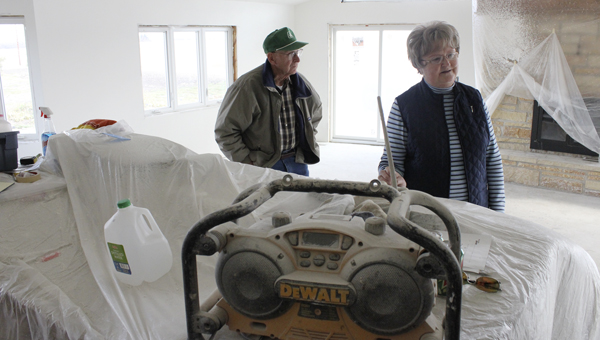 Ellwood and Janice Tukua stand in their living room Thursday while a construction stereo blares classic rock for the workers. The music was turned down so they could speak with a Tribune reporter about the work their insurance company was paying for. -- Tim Engstrom/Albert Lea Tribune

MANCHESTER — Every Christmas for several years, Ellwood and Janice Tukua of rural Manchester have placed four golden reindeer on the mantle above their fireplace.

The reindeer have been a centerpiece of the holidays in their living room, and otherwise were stored in their two-car garage.

On June 17, the reindeer flew. 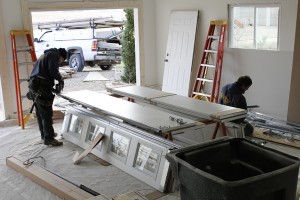 Matt Hanson, left, and Marty Dittrich do preparation work Thursday for two garage doors they installed that same day. The Tukuas were surprised to see they had doors on their garage for the first time in months. -- Tim Engstrom/Albert Lea Tribune

One reindeer flew up into the attic; one flew to the living room, but didn’t make it to the mantle, getting stuck between the wall and the roof. The other two remained on the shelf.

Though they smile when they talk about the outcome of the reindeer in the June 17 tornadoes that destroyed and damaged several dozen homes in Freeborn County, it was a reminder for the couple of the damage the family received during a house fire in 1994 — the last time they had to rebuild.

As Christmas approaches this year, Janice said she and her husband will have to find a new place to celebrate the holiday, but they said thanks to insurance and the help of friends and family, they hope to be able to move back into their home, on 690th Avenue northwest of Manchester, in the spring.

“They were so good, so supportive,” Janice said.

She said a tornado leveled three outbuildings, destroyed between 350 and 400 trees, shattered about half of the windows in their home, damaged their garage and ripped the roof right off their living room.

One tree fell on the deck, and three trees fell in front of their garage. Their house was splattered with mud and items were thrown about. 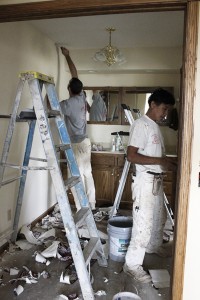 Brian Schwingle, left, and Im Iem work on a bathroom Thursday at the Tukua home, which was severely damaged by a tornado in the June 17 thunderstorm. That day turned out to be the most tornadic in state history. -- Tim Engstrom/Albert Lea Tribune

Anything from the south side of the house was damaged — that was what direction the tornado came.

“I’d heard the racket up here when it hit,” Janice said, noting that she and her husband were in the basement at the moment the tornado passed through their property.

When they went upstairs afterward and found open sky and lots of damage, they were overwhelmed, she said.

The next day, June 18, they said their agent from American Insurance, came out to take pictures of the devastation and to offer the couple boxes so they could pack up any belongings that were salvageable. Those pictures were later given to an insurance adjuster.

Janice said having gone through a house fire 16 years ago, she and her husband had full replacement coverage on everything in the house.

They lived in an RV on their property for about a month, until July 27 when they moved into Lake Chapeau Condos in Albert Lea while the work was done on their house.

They said two structural engineers determined that the house was worth saving, so crews have since built a new ceiling and roof and wall in the living room and have been working to replace and restore other parts of the house that were damaged. New outbuildings have been erected.

Contractor Chris Kirsch out of Owatonna has been overseeing the work.

“It was a relief to know we wouldn’t be rebuilding and go through all of that again,” Janice said.

Janice and Ellwood acknowledged that while the whole insurance process was slower than normal, they understood that insurance companies were swamped following the devastation.

She said they still are compiling the final damage totals as there is still more work to be completed, but they are pleased with how the process has gone thus far.

Brad Bjerke, a farmer who lives on Hammer Road near the intersection of Freeborn County Road 45, didn’t have to go through the devastation of the June 17 tornadoes, but he did have to experience the storms the following weekend.

He said on June 26 he suffered from high winds on his property, receiving damage to his house’s roof, siding and windows, a machine shed and major damage to a barn.

It was the first time in more than 60 years to have any building damage on his property.

Bjerke said he called his insurance agent with Americana Insurance on June 27, the adjuster called the next day and his agent stopped by the following day.

On June 29, the adjuster arrived to take pictures. By Friday night, July 2, bids had already been received for the work that needed to be done on the house.

The bids were mailed to the adjuster, who ultimately approved everything.

Bjerke said one tree fell on the southeast corner of the house, and ultimately the insurance covered the removal of that tree, along with the replacement of the gutters and downspouts and the re-shingling of the entire roof, though only a few shingles were damaged.

Repairs were completed to the house Aug. 12, but they could have been done even earlier if the replacement windows had come in earlier.

“I was treated better than I expected,” he said. “I had no stress about it.”

He said he got an estimate about the damages to his barn on Sept. 11, and this bid was also approved. He was insured for 50 percent of the value of the barn because of its age. It was built in 1914.

Bjerke noted it is not practical to repair this barn and it will be torn down in September 2011.

Tom Sorenson, Americana Insurance agent, said insurance companies around the state have paid millions of dollars to get people back on their feet and to, ultimately, boost the economy after the summer’s storms.

Sorenson said Northstar Insurance, out of Cottonwood, alone has paid out more than $167 million in claims in 2010. The company this year has had three out of their five top catastrophes ever.

He encouraged people to use this catastrophe as a learning experience.

“The key is to trust your agent and your agency,” Sorenson said. “Is your agent a professional, or is he just trying to make a sale?”

He also encouraged people to study their insurance policies.

“The misconception is people think they have insurance, so they think it’s going to cover everything that happens,” he added. “It all depends on what type of policy you have, what kinds of endorsements you have. The cheapest insurance is not always the best.”

He said he has extreme respect for his clients who have had major losses — including whole farm losses — and who have resiliency to rise above.

“It is a great feeling to be such a big part in putting people’s lives back after a disaster happens,” he said. “We are saddened by the situation that occurs, but it is really an awesome feeling to know that when someone gets their home fixed or rebuilt that it is because of the product you sold them.”