There’s a new sheriff in town 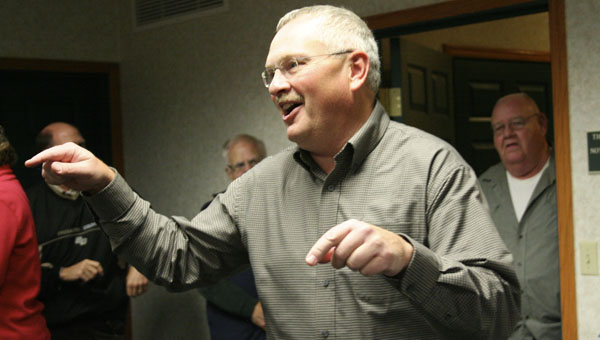 “I’m extremely pleased with all of the hard work and effort the people on my campaign put in,” Kindler said. “I’m very honored and want to thank everyone who supported me.” 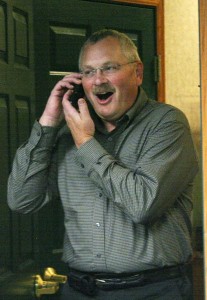 Bob Kindler reacts to the news that he won the race Tuesday for sheriff of Freeborn County. -- Michelle Haacke/Albert Lea Tribune

Kindler received 61 percent of the votes with 8,099 total votes.

Incumbent Sheriff Mark Harig, running for a third term, received 39 percent of the votes with 5,203.

Harig, in a statement released Wednesday morning, said he was “humbly grateful” for support received from his friends during the last three elections.

“Having been with Freeborn County Sheriff’s Office for 36 years and 351 days, the past eight years as sheriff, I want to thank Freeborn County citizens for the privilege of being your sheriff,” Harig said.

Kindler has served the residents of Freeborn County for 23 years, as a patrolman, a detective and, most recently, a detective supervisor.

This will be his first term as sheriff.

More than 60 Kindler supporters celebrated the win with him and his wife, Laurie, at the Country Inn & Suites conference room in Albert Lea on Tuesday night.

“This is definitely a positive impact for the county,” said Adam Hamberg of the Albert Lea Police Department, who previously served as a Sheriff’s Office deputy. “I think new leadership is what the deputies need for morale. I don’t think there was a better candidate for the job.”

One of the cornerstones of Kindler’s campaign was restoring an alleged decline in morale that’s occurred in the Sheriff’s Office in recent years. He also touted during his campaign that he would establish a strategic plan for the future, focus on traffic safety and crash reduction, increase patrol presence in rural areas and eliminate monetary waste.

“My primary goal initially is to get the department back together,” Kindler said. “I’ll tackle the morale first, and then the other problems as I can.”

He said though he won’t be able to put any of his campaign plans into effect until he takes office in January, he will begin preliminary planning by making contact with the county administrator and county board of commissioners.

Kindler said that first thing Wednesday morning, he will go around pulling out campaign signs and then report to work as usual Wednesday afternoon. 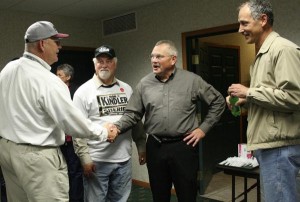 Dave Nolander shakes the hand of Bob Kindler, who was elected sheriff Tuesday. Between them is Gene Peters and on the right is Ken Peters. -- Michelle Haacke/Albert Lea Tribune

Kindler’s wife, Laurie, was proud of her husband’s win and thankful, at the same time, that the campaign is over.

“Since the end of May when he filed, it’s been nonstop until this past Saturday,” Laurie said. “I’d like to thank everyone for their support, and the law enforcement community for their dedication to getting him elected.”

“We’re all really proud of Bob for stepping up to hopefully make things better for Freeborn County citizens,” she added.

End of an era

Harig served in the Freeborn County Sheriff’s Office since 1972 as a jailer, patrolman, detective, narcotics investigator and supervisor. He was voted into office as Freeborn County sheriff in 2002 and won his second term in 2006.

Earlier Tuesday evening at his campaign headquarters at the Salvation Army community room, Harig was joined by more than 60 supporters. At that time, he said he felt good about the campaign.

“I am sure Freeborn County will continue to grow as a community and as a healthy viable Sheriff’s Office,” he said in Wednesday’s statement. “I have no doubt that the talented men and women working here will provide the best services available for all of us.”

Harig also commended his staff for taking their oath knowing the job is seven days a week including nights, weekends and holidays.

“We have many heroes among us who have saved lives because they were ‘doing their jobs,’” he continued. “I have the utmost respect for each individual I work with. This includes officers, firemen, responders and citizens who assist us every day to keep these United States safe from harm.”

Harig’s wife, Trudy Harig, commended her husband for his campaign and the care he’s given to Freeborn County for the past 38 years.

“I’m really proud of the fact that Mark carried this campaign with integrity and ethical behavior,” she said. “Mark and I covered all of the surrounding communities ourselves door knocking, and got a lot of really positive, good feedback.”

“He tried to do his best for the sheriff’s department and the people of Freeborn County, and that’s not always easy,” she added.

Harig had previously stated he would retire if he was not re-elected.

Trudy pointed out it’s been a very busy year not only with the campaign, but also with the tornadoes, floods and FEMA meetings. She said that while retirement would give she and Mark more time together, she anticipates he will still be involved with the community.

“The people in Freeborn County are really important to him,” she said.