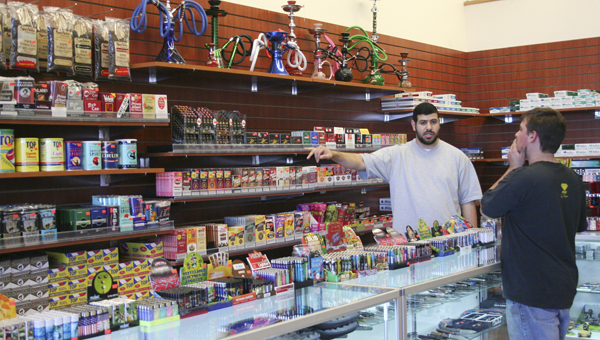 Sam Wazwaz, owner and manager of the Tobacco Store, helps a customer with tobacco selections last week. The shelves have tobacco products from rolling papers to hookahs. Knives are in the glass case. -- Michelle Haacke/Albert Lea Tribune

After 13 successful years in Lexington, the Wazwaz family has expanded its business into Albert Lea.

The Tobacco Store, which features tobacco products and smoking accessories, opened Nov. 1 in the Super Center Plaza, the strip mall on Hendrickson Road south of Walmart. 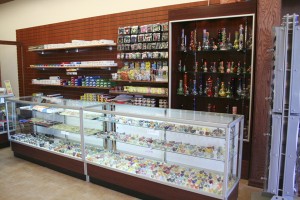 “The Twin Cities are overcrowded with tobacco businesses,” said Sam Wazwaz, owner and manager of the new Albert Lea shop.

He said the Wazwazes chose to open in Albert Lea because there are no other stores like it around.

“I thought it would be nice to open a small business like this in a small community,” he added.

“We’re a specialty store for this product,” he said. “They come here knowing we sell tobacco products.”

He said the family knows the customers are 18 or older and noted tobacco is sold in gas stations and grocery stores, too.

Business has been hopping, he said.

Sam said the store stays busy because of the extra customer service they give to their patrons.

“I’ve been in the business for 12 years, and can talk to them about the prices, the brands,” said Sam. “We have some people who just come to see what we’ve got, and we talk to them, and they bring their friends and families back.”

The Wazwaz brothers said their most popular items have been the roll-your-own tobacco, pipe tobacco, pipes and cigars.

This was no surprise to Ross, as those are also the most popular items they sell in Lexington.

They do carry cartons and individual packages of cigarettes and chewing tobacco, too. 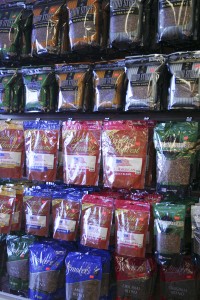 The bagged tobacco used in pipes and for rolling cigarettes is one of the most popular items at The Tobacco Store. -- Michelle Haacke/Albert Lea Tribune

The humidor hasn’t yet been installed, as the brothers are waiting on the correct doors to arrive, but when it is installed they plan to carry about 50 different kinds of premium cigars. Cigars are currently sealed and stored in the back room.

Some of the top-of-the-line cigar brands to line the humidor include Macanudo, Arturo Fuente, Ashton and Monte Cristo.

“Premium means that these are 100 percent natural, they aren’t processed and no chemicals are added,” Sam said. “It’s basically a big leaf of tobacco rolled into a cigar.”

Cigar accessories, from portable humidors to cigar cutters and punchers are also on hand.

A variety of smoking accessories also line the shelves, from conventional wooden and corn-cob pipes to Egyptian hookahs, glass pipes and glass bongs.

Ross said hookahs offer a “smooth kind of smoking” with flavored tobaccos, for which they offer up in a rainbow of flavors: lemon, apricot, cherry, mango, chocolate and blueberry.

When asked how he responds to claims that the hookahs, bongs and glass pipes could be mistaken for drug paraphernalia, Sam said he simply takes the time to explain to people the proper uses of these smoking accessories to his customers.

“The younger generation really knows more about them,” he said. “There are several hookah bars in the Cities.”

A detective with the Albert Lea Police Department explained that once tobacco-smoking gear is used for smoking marijuana or other illegal substances, it becomes drug paraphernalia and can be confiscated by law enforcement.

Hunting and fishing knives, painted with outdoor and wildlife pictures in wood boxes, along with larger models are just a few of the other items found at the Tobacco Store.