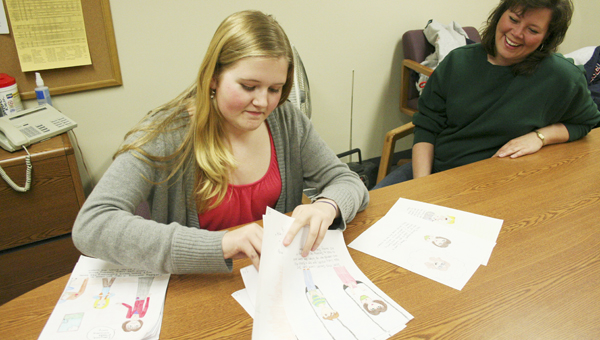 Nicole Borneman rifles through the pages of her book, chosen to be published by the United Way for 2012. Looking on is her mom, Karen Borneman. -- Michelle Haacke/Albert Lea Tribune

By the end of the class period, the story was written.

Little did she know that this story, followed by her own hand-drawn illustrations, would earn her the honor of being chosen as the youngest author to have her book published for the United Way of Freeborn County’s annual book campaign. 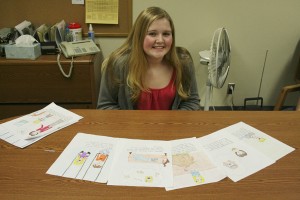 Nicole Borneman shows off the pages of her book, chosen for the United Way 2012 book campaign. -- Michelle Haacke/Albert Lea Tribune

Borneman’s story, “Timothy Learns a Lesson,” will be published as the United Way’s 2012 children’s book.

The story is about Lucy, an elementary student who starts a new school. A boy in her class, Timothy, decides he doesn’t like Lucy and begins to pick on her. Eventually, a teacher has a talk with Timothy, which prompts him to realize that bullying Lucy is wrong.

Borneman said she didn’t choose the subject matter because of any experience she or her friends have had with bullying. She has seen the behavior, and posters addressing the issue hanging around her school prompted the idea.

“I know it goes on a lot and causes a lot of problems for people in school,” she said.

Ann Austin, United Way executive director, said Borneman’s story was chosen from nine local books submitted for the 2012 campaign. While ideas ranged from the loss of a pet to the moon and parents, what stood out about this book was the relevance.

“The story line was excellent, the way it brought the reader through the kids’ challenges,” Austin said. “We thought the kids would see this as a role model type thing.”

Each year, the Freeborn County chapter partners with local business sponsors to publish a book to promote early childhood literacy. The book is distributed to all Freeborn County students in kindergarten through second grade.

Borneman’s book was chosen by a panel of judges about two weeks ago. She received a letter in the mail on Nov. 12 with the good news.

“I would’ve screamed, but I opened it at the supper table and my brother, Charley, had friends over,” Borneman said. “I was trying to be quiet, screaming into my hand.”

Borneman said the illustrations were slightly challenging, but that wasn’t a problem because she enjoys drawing.

The budding artist and writer began reading when she was 4 years old. She wrote her first book, “A Cat Named Trouble,” when she was in the third grade. In fourth grade, she won an award from Pioneer Press for another book she wrote, “New Kid in School,” also about bullying.

The fact that both of her honored books were about bullying is merely a coincidence, but she hopes it brings light to the matter.

“If we can get the message across at a younger age, I hope it helps,” she said. “I hope kids realize when they see it going on to help, or just to not do it (bully).”

Nicole, 14, is the daughter of Karen and Wayne Borneman of Albert Lea.

“Timothy Learns a Lesson,” will be the 10th annual book published by United Way of Freeborn County.

United Way’s ninth book, titled “Apples: 1, 2, 3” will be printed this winter and released in the spring of 2011. Written by local author Bill King and illustrated by Rachel Ringham, the story is about the production of apples “from seed to store” and highlights the adventures of Johnny Appleseed.