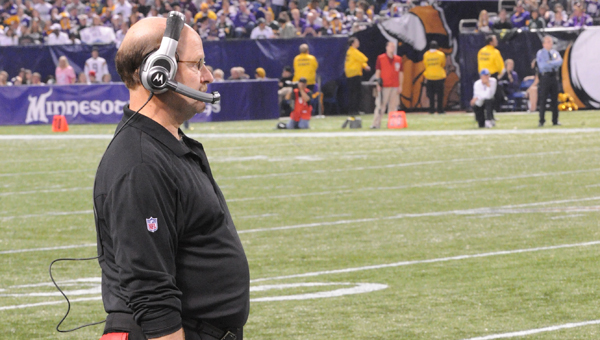 Brad Childress watches the action Sunday against the Packers, his final game as coach of the Vikings -- Scott Schmeltzer/Albert Lea Tribune

EDEN PRAIRIE — The Minnesota Vikings fired Brad Childress on Monday, cutting ties with a head coach who had come under increasing fire from his players — and his boss — for everything from their horrid start to his 1-2 playoff record and his abrupt decisions.

Defensive coordinator Leslie Frazier will serve as interim head coach for the remainder of the season.

The Vikings fell to 3-7 after a 31-3 loss to rival Green Bay on Sunday, the final blow to Childress in his fifth season in charge of the team. It was his most-lopsided home defeat as head coach, dropping his overall record to 40-37.

Childress took over for the fired Mike Tice in 2006 after spending seven years with the Eagles, including four as the offensive coordinator. He was chosen by owner Zygi Wilf to instill discipline and demand better off-the-field behavior from a team that was embarrassed the year before by a bye-week boat party gone bad and a number of other legal problems for players.

However, Childress stumbled in his first year and never fully gained the faith of the fans — or some of his players.

He infamously cut dissatisfied wide receiver Marcus Robinson on Christmas Eve, had trouble connecting and communicating with some of his players and often came across to the public as rigid and aloof.

The offense struggled without a clear solution at quarterback, and it wasn’t until last year, when Childress persuaded Brett Favre to put off retirement a second time, that the Vikings finally put up points and became the dominant team that matched the Pro Bowl talent on the roster.

Still, they went from 6-10 to 8-8 to 10-6 to 12-4 in his first four seasons, losing in the NFC title game in overtime last January to the eventual champion New Orleans Saints. Last November, Wilf — pleased by the stability and the progress — gave Childress a contract extension. According to an ESPN.com report on Nov. 19, the deal runs through 2013 but the final year is the team’s option.

This season almost seemed destined for doom, given how smoothly it all went in 2009 until the very end and how well the 40-year-old Favre played by taking care of the ball and making age-defying throws into the end zone.

Favre didn’t show up for camp until mid-August, and the next week wide receiver Sidney Rice had hip surgery. Wide receiver Percy Harvin missed big chunks of time, mostly because of migraine headaches, and center John Sullivan was out of action for several weeks with a nagging calf injury.

Coincidence or not, the offense was out of sync to start, Favre began turning the ball over at costly times and the Vikings suddenly were missing last year’s magic.

The relationship between Favre and Childress, which was tense at times in 2009, seemed to sour further when Favre threw three ill-fated interceptions in the Oct. 24 game at Green Bay and the Vikings lost to Favre’s old team.

Childress, who was just 3-9 against the rival Packers as Minnesota coach, was sharply critical of Favre’s decision-making afterward, and the coach drew his own criticism for failing to challenge a Packers touchdown catch that could’ve been overturned because the ball was being bobbled.

Then the situation really went south following a loss at New England. Wide receiver Randy Moss, acquired in a trade for a third-round draft pick just four weeks earlier, went out of his way to praise the Patriots and criticize Childress in a post-game rant.

The next day, Childress told his players he had cut Moss and never fully explained the situation to them or the public. Wilf was reportedly angry that Childress didn’t tell him first of his plan, and there were anonymous reports of growing dissatisfaction in the locker room about the boss. Childress and Harvin got into a heated argument during one practice over an MRI test on his sprained ankle.

Fans made no secret about their frustration, with thousands of “Fire Chilly” signs distributed on Nov. 7 outside the stadium before the Vikings played Arizona and several chants breaking out from the seats during the game.

The Vikings rallied for an overtime victory over the Cardinals to table the firing talk temporarily, but a 27-13 loss at Chicago on Nov. 14 and the blowout against Green Bay cranked it back up again.