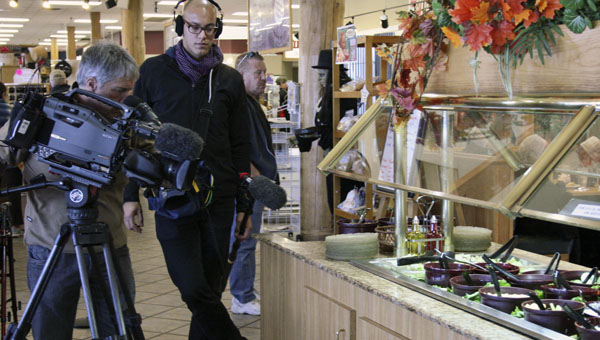 A French documentary crew filmed at Trail’s Restaurant Thursday during a two-day visit to Albert Lea for a documentary on longevity, which revisits the AARP/Blues Zones Vitality Project. Pictured are Gean-Luc Andre, director of photography, left, and Raphael Laski, sound engineer, who were filming the salad bar at the restaurant. -- Sarah Stultz/Albert Lea Tribune

A French documentary crew traveled to Albert Lea this week to shoot footage about the AARP/Blue Zones Vitality Project and its effects on longevity.

The footage will be part of a 90-minute documentary on the secrets to longevity that will air next summer on France 3, a public channel viewed by 3 to 6 million viewers. The documentary will also be pitched to other channels, including The Discovery Channel, later this month, said Emmanuel Roblin, writer and director of the film.

Roblin said by the time the crew has completed all of the filming for the documentary, they will have filmed for 45 to 50 days. When completed, their filming will have taken them to centenarians on the Japanese island of Okinawa for 15 days, to Blue Zones founder and author Dan Buettner in Minneapolis, to Sardinia, Italy, and to Loma Linda, Calif., the city in the United States with the most centenarians.

In Albert Lea Wednesday and Thursday, the crew met with the Bryan and Cathy Purdie family for a grocery shopping trip at Hy-Vee and for dinner.

Roblin said he wished he and the crew could stay in Albert Lea longer than just two days.

He noted he has found it interesting to see the energy that has been spent here to encourage people to live healthier.

The visit was one of several Albert Lea has received since the end of the pilot Vitality Project last year.

The project has also been featured by a documentary crew in South Korea, USA Today, Newsweek, AARP The Magazine, “The Doctors,” “Nightline,” “Good Morning America,” CNN.com, Oprah.com, among other regional newspapers, television news and radio broadcasts, to name a few.

Roblin said his documentary has been several years in the making and stemmed out of a personal interest in longevity after his wife’s grandfather lived to be 104.

“It’s a personal way of trying to find out why he lived so long,” he said.

He and his crew started filming in June.

After the filming is completed, he estimated three to four months of editing, with the documentary to be ready to air after June 2011.

The film has been picked up by Adamis Production, who is pitching it to other channels.