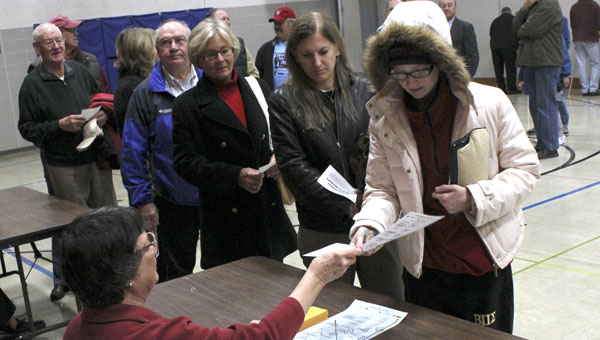 Bundled in a winter coat on a frost-covered morning, Leah Matheson takes her ballot today at Brookside Elementary School in Albert Lea. The polling place for Ward 1, the school was packed with people voting before they go to work. -- Tim Engstrom/Albert Lea Tribune

Early-morning voters ventured to the polls before sunrise today to cast their ballots for a series of local, state and federal races, after what has been a long campaign season. 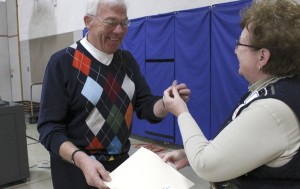 Freeborn County Auditor-Treasurer Dennis Distad said he is anticipating a 79 to 80 percent voter turnout across Freeborn County, which is lower than the turnout typically seen for a presidential election.

Distad said while Freeborn County’s race for sheriff will draw many people to the polls, he thinks some voters are frustrated with statewide elections, including the race for governor, and as a result may not even vote at all.

He encouraged people to cast their vote.

“It’s the thing to do to go out and vote and express your opinion,” he said. “If you go out to vote, we’re ready for you and you should have a pleasant experience.”

At Brookside Education Center this morning — where 1st Ward residents vote — there was a steady flow of people casting their ballots and there were even some lines.

A handful of voters who came out of the building said they thought the biggest issue for them in the election was the race for Freeborn County sheriff and Albert Lea mayor. 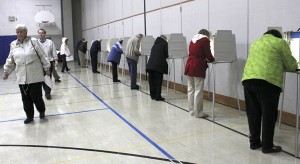 Voters fill in ovals on the ballots this morning at Brookside Elementary School while others carry their ballots to the ballot scanner. -- Tim Engstrom/Albert Lea Tribune

Voter Cheryl Page said she had been inquiring into the sheriff’s race prior to coming to vote.

Page also noted that though she supported 1st Ward Councilor Vern Rasmussen in the Albert Lea mayor race, she said she did not like how she felt there was virtually only one person on the ballot, after former Albert Lea Mayor Mike Murtaugh resigned in September and asked people not to vote for him.

In a letter to the editor printed in Sunday’s Tribune, however, Murtaugh said though he will not accept the office if re-elected, he will not deter people from casting their vote as they choose to make a statement about dissatisfaction.

Ray and Joyce Langerud said they, too, were interested in the sheriff and mayoral races, and noted that they decided to vote because it is a privilege.

Joyce said she has been frustrated this campaign season with the negativism and added that when there’s so much negativity, candidates aren’t talking about the issues; they’re fighting back against their opposing candidates.

Former Albert Lea school board member Bill Villarreal said the issues important to him leading to this election were the state deficit and who can best serve the people, whether that’s at a local, state or federal level.

He also noted that there were several people who ran unopposed, which he said bothered him in some ways but in others it showed that maybe those officials are doing a good job in their seats.

Villarreal said it was hard for him to pick a gubernatorial candidate, as he saw issues on both sides he agreed with.

“I just voted for the one I agreed with the most,” he said.