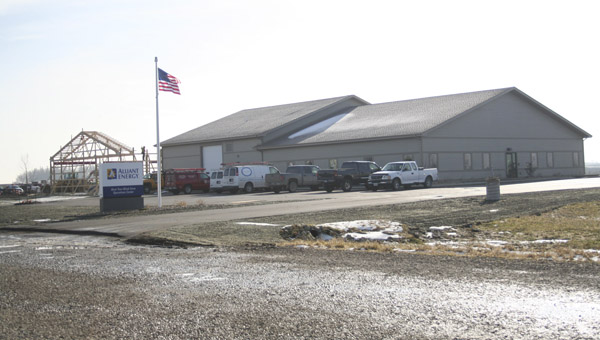 Workers at Bent Tree Wind Farm will soon move into this new building, which will serve as the hub of operations for the wind farm. -- Michelle Haacke/Albert Lea Tribune

HARTLAND — Employees at Bent Tree Wind Farm in Hartland will soon be working out of a new building.

A new office building has been constructed on the east side of Minnesota Highway 13, across from Hartland’s Cenex gas station.

It will serve as the wind farm’s hub of operations.

“If a farmer has an issue, he will go to the new building to talk to the administrator, to get directed to the right person,” said Ted Francois, project developer for Alliant Energy.

He said tours and presentations will also be held in this new building.

“Once the building opens, these trailers will go away,” Francois added.

The office building is expected to be up and running the first couple weeks in December, after electricity is hooked up and office furniture is delivered. Greg Kaelberer, site manager at Bent Tree Wind Farm, said while there will be some activity in the new building next month, it will not be fully occupied until the first week in January.

Kaelberer said the new structure will house about 20 employees, who are currently working out of the rows of trailers across the driveway from the new structure. These include office personnel and a full staff of technicians for the wind farm. Employees of Alliant Energy and turbine manufacturer Vestas will also be housed in the new structure.

The new office building is about 9,000 square feet and in addition to offices and conference rooms, will include an attached warehouse for turbine inventory, packing and shelving.

A second building, measuring about 4,000 square feet, is being constructed beside it to serve as an equipment and maintenance garage and vehicle storage unit.

“It will be used mostly to park trucks out of weather,” said Kaelberer.

Francois said at this point, about 200 people, including contractors, office staff and wind tower workers, are working at Bent Tree Wind Farm.

Kaelberer said they are actively looking for local contractors to help out with a variety of things, such as snow removal this winter.

He said he expects Alliant Energy to hire more personnel for the site as the warranty period on the turbines expires, which will happen over the next several years.

To date, all of the turbine parts have been delivered and 94 of the 122 turbines being constructed are completely up. Francois said not all of the circuit connections have been made, so the turbines are not all operational at this point.

Francois said the target date for completion is spring 2011. Each turbine will go through a series of tests before it is allowed to generate power.

When completed, Bent Tree Wind Farm is expected to produce enough energy to power about 50,000 homes.