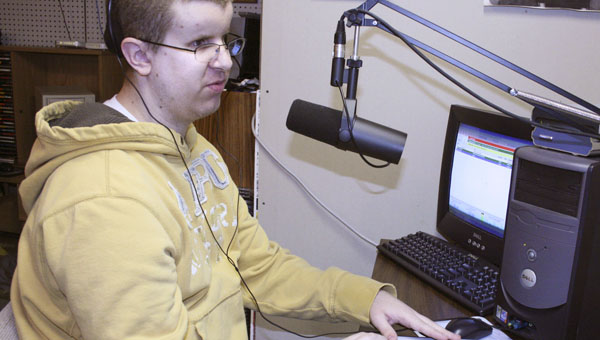 Albert Lea resident Eric Harms shows how to use his radio equipment Monday in his basement. Harms, who is blind, puts on a weekly country Internet broadcast at www.theqonline.net. -- Sarah Stultz/Albert Lea Tribune

He said he has recordings of himself as a child, carrying around a microphone and interviewing his father.

In 2002, he connected with an employee of KATE/KCPI Radio, who was a disc jockey at the time, and began to learn the ins and outs of audio production.

Now Harms works part time at the radio station on the weekend, running feeds and making sure programs air, and he has his own weekly Internet broadcast show. On it, he counts down country Billboard hits and talks about other country music news.

Eric Harms of Albert Lea uses a machine fitted with wireless Internet to read the day's weather forecast on Tuesday. Harms said he uses the machine when he works part-time at KATE/KCPI radio on the weekends. -- Sarah Stultz/Albert Lea Tribune

You’d never know just by listening that on the other end of that speaker Harms is doing this all without the luxury of vision.

Using new technology, the blind man is able to make his weekly show with ease, adjusting levels, changing CDs just as any person who could see — a “sighted person,” as he calls them — would do.

He’s confident not to let anything stop him from achieving his goals. By learning ways to adapt to his disability, he is able to perform most tasks effortlessly.

“It’s how you pay attention to what you have,” Harms said. “When one thing goes away, you don’t have that feature anymore, so you have to use what you have.”

As a young child he was able to see.

However, he lost his first eye to retinoblastoma — a tumorous cancer —  and then by the time he was 7, the same thing happened to his second eye.

Going into first grade, his parents held him back a year so he could learn Braille.

He said when he attended Albert Lea High School, it had been at least 40 years since there was another blind student there.

“There’s a lot of negativity on blind people,” Harms said. “In a sighted world, people think you can’t do anything. They say, ‘You’re blind. What can you do with yourself?’ But there’s different ways for adjusting to it or working around it.”

Eric Harms walks using a walking cane in the living room of his house Tuesday. He said he typically doesn't use the can to walk in the house because he is so accustomed to the house, but he usually uses it when he goes to other places. -- Sarah Stultz/Albert Lea Tribune

He said many times being a successful blind person requires having a person who can see giving them an opportunity.

“They need to open up their eyes and try to see a world in a disabled person’s life,” Harms said. “Watch or ask to see a blind person in action and see they can do this, that they can do that. A lot of sighted people in the world won’t give people that opportunity.”

Harms said down the road in find years, he would like to five a full-time job — instead of just two part-time ones  — and maybe move up to the Twin Cities where he can live more on his own.

He said in 2005 he went to a training center for the blind in Minneapolis called BlindnessLearning In New Dimension, where he learned how to complete everyday skills, including increasing his reading speed, learning computer programs, learning to cook and learning to travel, among others.

His father, Reginald, said after seeing the things his son’s been able to accomplish, he is confident in his capabilities.

“You get to the point where you feel they can do anything,” he said.

Harms loves chatting on the computer with his friends, talking with other people who are blind and baking.

He has also learned how to play the piano by ear — he has perfect pitch.

Interesting fact: Harms is teaching himself to play the organ.