The population of Minnesota is increasing.

According to the U.S. Census Bureau, which released the first of the 2010 census data Tuesday morning, the population of Minnesota has grown from 4.9 million residents to 5.3 million residents. This is a 7.8 percent increase over the past decade. 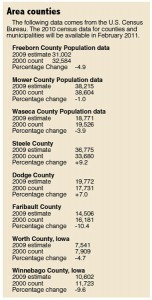 Total state populations and House of Representative apportionments were announced at 10 a.m. during a news conference at the National Press Club in Washington, D.C.

Minnesota held steady with eight House of Representatives. It defied the regional trend.

The county and municipal data will not be available until February 2011.

Census data, specifically population and housing data, is used to determine distribution of more than $400 billion in federal funds to local, state and tribal governments each year, as well as to determine the distribution of Congressional seats to states, community and school funding, just to name a few.

Here in Freeborn County, the data is important in determining public services and district boundaries.

According to the U.S. Census 2009 estimates, the population of Freeborn County was 31,002 last year. Freeborn County administrator John Kluever said if that number of residents falls below 30,000, it could mean changes in services provided to the residents of the county, specifically with public health.

If a population shift within the county is indicated by the census numbers within, it could mean redistricting the county commissioners’ districts. 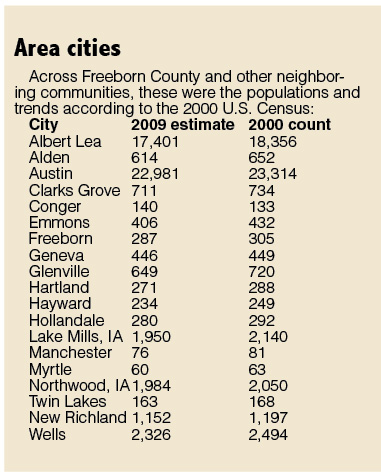 For the city of Albert Lea, the census figures could also bring up the subject of redistricting, if those figures reveal a shift in population within the city limits.

“There’s a lot more to formula for the local goverment aid than just population, but that number does affect how much or little money we receive from state,” he said.

An increase in population was a trend seen across several states and the country, as a whole.

The national residential population count in the United States, as of April 1, 2010, was 308,745,538 persons. This reflects a 9.7 percent increase over the national population data from the 2000 Census.

In the Midwest, South Dakota has seen the highest increase in population over the past decade, with a growth of 7.9 percent. Michigan saw the largest population decline since the 2000 census, losing 0.6 percent of its population.

As for geographical dispersion, the five states with the highest population density have remained the same over the past 40 years: New Jersey, Rhode Island, Massachusettes, Connecticut and Maryland.

The lowest population density for the past 20 years has held steady for Alaska, Wyoming, Montana, North Dakota and South Dakota.

Once every decade, the U.S. Census Bureau releases the official population and housing data. The data for the 2010 Census was collected earlier this year. The goal is to count every single resident in the country.

Ten questions were posed on the census forms to collect population and housing data.

The 2010 census is the 23rd census taken nationwide since the birth of the U.S. The law requires that the U.S. Census Bureau to report these results to the President by Dec. 31.