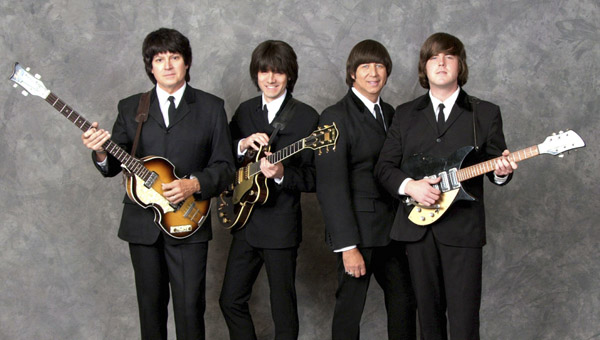 People in Albert Lea will be twisting and shouting the night away in the name of fun — and community spirit — this Friday night.

Thorne Crest Retirement Community and the Freeborn County Humane Society are teaming up to co-host a benefit concert, starting at 7 p.m. in the Albert Lea High School auditorium.

The two-hour concert will feature American English, which has been coined the “ultimate Beatles tribute band.”

“It’s going to be a ’60s night,” said Nancy Rosenberg, a volunteer with the Freeborn County Humane Society. “Come in your ’60s outfits, break out the bell-bottom jeans and tie-dye shirts.”

She hopes the universal draw of the Beatles’ timeless music will attract a big, all-ages crowd to Friday’s event.

“I listened to their CD and was amazed at the sound,” she said. “American English sounds just like the Beatles.”

Fans agree. American English has been coined the ultimate Beatles tribute band by fans around the world, including Paul McCartney, who made a surprise appearance to jam with the band in 2001.

Beatles fans voted American English as winners of sound-a-like contests at Beatlefest for three consecutive years. They have also won Illinois Entertainer of the Year and been voted “Best Tribute Band” three of the last four years by their fans in the Chicagoland area.

The show will begin with American English performing music from the early years of Ed Sullivan. The play list includes “She Loves You,” “Twist and Shout” and “I Want To Hold Your Hand,” just to name a few.

The band then journeys down the Beatles’ psychedelic era, with songs from “Sgt. Pepper’s Lonely Hearts Club Band” and “Magical Mystery Tour.”

And, in the end, they will relive the final years of the Beatles with favorites from “The White Album,” “Let It Be” and “Abbey Road,” including “Hey Jude,” “Something,” and “Let It Be.”

Of course, you can’t fully enjoy this long and winding road on an empty stomach, which is why the Leo Carey American Legion Post 56 has joined in on the fun. From 4 until 7 p.m., the Legion will host a burger basket fundraiser with proceeds also being split between Thorne Crest and the Humane Society.

Proceeds from both benefits will be divided equally between Thorne Crest and the Freeborn County Humane Society.

“Thorne Crest originally asked us to join them in this effort,” said Rosenberg. “It was a community-spirited effort and we thought it would be a nice thing to do.”

“We decided to do this because we wanted to help those who can’t help themselves,” said Kay Goodmanson, director of marketing and sales at Thorne Crest.

She said both the residents and staff have been interested in the efforts by the Humane Society to take care of animals left homeless, and have offered up a lot of support in making this fundraiser a reality.

Thorne Crest plans to use funding from this event to install an upgraded entrance with barrier-free main entrance doors, allowing greater access for their residents and visitors as well as added security and energy efficiency.

Rosenberg said the portion of proceeds received by the Humane Society will go back into the two-to-one challenge grant by The Carl and Verna Schmidt Foundation out of Rochester. That means for every $1 donated through Dec. 11, the foundation will give $2.

Rosenberg said these funds will be used replenish the building fund.

“There’s no use having a building if you can’t afford to run it,” said Rosenberg.

She said any donations received after the event will go into the operations fund. According to Rosenberg, the Humane Society’s goal is to eventually add a food bank and medicine bank for the pets who have been placed, to help owners be able to keep the animals they have adopted.

“We want to take care of the animals and the people who care for them,” Rosenberg said.

The Humane Society reportedly lost a $150,000 donation in escrow when Albert Lea Abstract Co. closed amid allegations of theft and racketeering. That money was to go toward an expansion of the animal shelter at Frank Hall Park.

Despite the setback, Rosenberg is optimistic about the future.

“We went strictly from fostering two years ago to a shelter,” she said. “We’ve had great community support and love everybody who’s been helping us.”