Bar in the bend likes to entertain 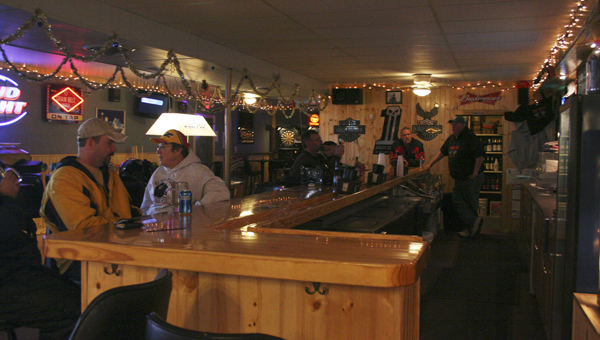 Owners Mike Skov and Scott Juveland, pictured in the back, remodeled Bend in the Road in Manchester when opening it in April 2009. -- Michelle Haacke/Albert Lea Tribune

MANCHESTER — Bend in the Road was hopping Tuesday afternoon.

About 10 snowmobiles were parked outside and co-owner Mike “Bass” Skov was busy serving up the drinks inside.

Riders in snowsuits were bellied up to the bar and playing pool, chatting and swapping stories, while Led Zeppelin blasted from the speakers.

“The trail runs right behind the bar, so it’s convenient for them to stop by,” said co-owner Scott “Mule” Juveland.

Juveland and Skov, who said most people only know them as Bass and Mule, are lifelong locals who purchased the bar nearly two years ago, opening on April 5, 2009. Skov had worked there for about 10 years before that time.

“It’s always been the Bend,” said Juveland. “We cleaned it up, but it’s still the Bend.”

In fact, before opening, the pair completely remodeled the inside of the bar. Just this week, they installed new tiling on the floor where the pool tables sit. Caution tape was protecting the new flooring in that pocket of the bar this week, to make sure the tiling sets properly before Bass and Mule put everything back in place.

According to Juveland, shooting pool is one of the bar’s most popular aspects. Guest pool players on Mondays and free pool Fridays fill up quickly.

Skov said guest spots are full until nearly the end of April 2011. Guest spots means that one person, or guest, gets to play pool for the entire night against anyone who challenges him or her.

He said the bar business is a challenge, so to keep things new, he hopes to start offering more live music.

In March, Jennifer “J.O.” Ordalen performed live to a standing-room-only crowd. He said the live music is always well-received, among not only the patrons but the residents who live around the bar, and he hopes to add several live performances to the summer lineup.

With New Year’s Eve just around the corner, Juveland said they have nothing special planned.

“We’ll get a good crowd on New Year’s, no matter what’s going on,” he said, adding New Year’s Day will probably bring a Bloody Mary bar.

The crowd is what keeps Juveland striving to do better with the Bend.

“We get people from 21 to 91 coming here,” said Juveland. “We have a laid-back crowd and our patrons have been coming here for a lot of years, so they help look out for things. You can come out, have a good time and feel safe.”