The funeral service for Bernice Ella Thompson, of New Richland, will be held at 11 a.m. on Tuesday at St. Peter Evangelical Lutheran Church of New Richland. The Rev. Scott Williams will officiate. Interment will be in Hartland Cemetery. Visitation is one hour prior to services at the church. Friedrich Funeral Home is assisting the family with arrangements. 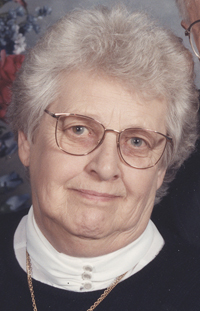 She was born on June 2, 1929, in Waseca County the daughter of Arthur and Eloise (Katzur) Kofstad. She attended school in New Richland and was an area resident most of her life.

She married Vernon Thompson on May 21, 1950, in New Richland. Bernice had worked at Land-O-Lakes and later Herters, retiring in 1990. She and Vernon along with Harold and Helen Thompson, owned a mobile home park in New Richland and she had still been active in keeping up with the book work. She loved to work at church where she was involved in church circle, taught Sunday school and had at one time served as Sunday school superintendent.

She loved to garden, sew and do crafts together with Vernon. She was very proficient at the “art” of lefsa making. She also enjoyed fishing and camping with family.

Bernice treasured the time with her grandchildren and took great pride in each and every one of them.

Bernice is survived by her husband, Vernon, of Albert Lea; two children: Harriet (Jim) Dietz of Faribault and Jeff (Dawn) Thompson of Byron;

She was preceded in death by her parents; three sisters: Ruth Demmer, Fern Smidt and Adele Foley; and several brothers-in-law and sisters-in-law.

Bernice will be greatly missed and fondly remembered as very hardworking wife and mother. She was someone who always put others before herself. Blessed be her memory.