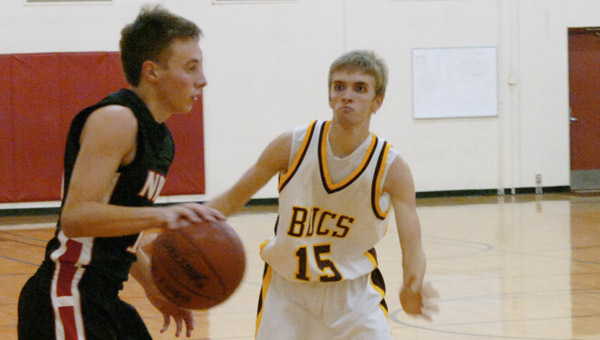 The Panthers had a chance to tie the game with 2.4 seconds left but a 3-point shot from Evan Ferber missed and gave the Buccaneers the victory.

“Their possessions got a little longer and ours got shorter,” Panthers head coach Pat Churchill said. “They got better shots than we did in the second half.”

The Panthers went into the halftime break with a 27-21 lead.

In the second half, Blue Earth Area turned to their big man Lee.

Lee pushed through the Panthers defense and scored 10 of his 18 points in the second half to help the Buccaneers pull out the victory.

“Sam Lee is a big kid,” Churchill said. “When he gets the ball he is really hard to defend.”

Later in the game with Blue Earth leading 41-40, the Buccaneers got a three point shot from Brady Anderson that pushed Blue Earth out to a 44-40 lead.

The Panthers responded as Matt Carlson scored the games next five points to give NRHEG a 45-44 lead.

The Buccaneers then turned to Lee as he had the next four points to to give Blue Earth a 48-45 lead.

NRHEG closed the gap to 50-47 when Matt Nafe made a two point but that was all the closer the Panthers would get.

Matt Carlson led the Panthers with 20 points, while Hunter Eustice was the other NRHEG player in double figures with 10 points.

The Panthers are back in action on Tuesday as they host Bethlehem Academy.