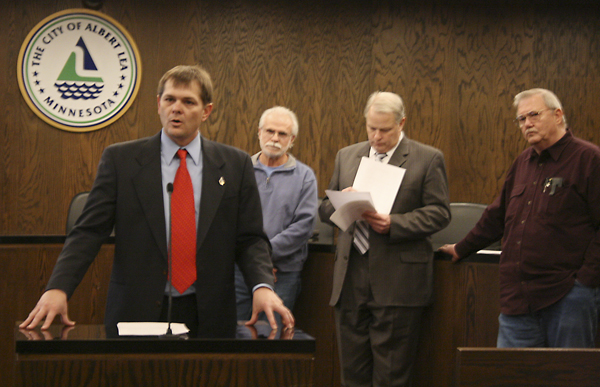 Albert Lea Mayor Vern Rasmussen speaks at a press conference Tuesday against a proposed Alliant Energy rate increase. He called on city residents and business owners to speak out Thursday against the increase at a public hearing at Riverland Community College. -- Sarah Stultz/Albert Lea Tribune

Calling the proposed 22 percent Alliant Energy rate increase outrageous, Albert Lea city leaders and business owners on Tuesday made a plea to the public to join them in their fight to oppose the increase.

During a press conference at Albert Lea City Hall, Mayor Vern Rasmussen asked that residents, business owners and all cities in southern Minnesota attend one of three public hearings in front of the Minnesota Office of Administrative Hearings about the case. This is the primary opportunity for people to voice their opinions about the proposal, though people can also write letters.

The hearings are Wednesday and Thursday in Winnebago, Stewartville and Albert Lea. The Albert Lea hearing is at 7 p.m. Thursday at Riverland Community College.

Rasmussen and Albert Lea Economic Development Agency Executive Director Dan Dorman said Interstate Power & Light — a subsidiary of Alliant Energy — is trying to pass along higher costs to consumers from a failed power plant in Iowa, overpaying for a wind farm and by a clever business strategy, in which the company sold their transmission lines to another entity, reaped the benefits of that sale, and is now leasing back the use of those lines and charging consumers the increased costs due to the lease.

“This is a classic case of a big power company making decisions that will increase their company profit, with little regard to the consumers who are footing the bill,” Rasmussen said. “During an economic recession — when families, businesses and cities are strapped to make ends meet — it is absolutely unacceptable for this company to try and pass along these costs to our community and our citizens.”

The city of Albert Lea is the largest municipal user of Alliant Energy.

Rasmussen estimated a rate increase would mean $240,000 in electricity rate increases per year for the city. That doesn’t include effects on residential and business consumers.

He said the city is not opposed to a legitimate rate increase, but area residents should not have to pay for bad decisions of IPL.

Dorman said he recognizes that there will probably end up being some sort of an increase in rates, but to have an increase at this level “isn’t acceptable.”

He said in a time when businesses already have many obstacles, they don’t need something else to make it worse.

He called the rate increase “a job killer,” and said it would be harder to recruit businesses to start in the area or to expand here if it went in place.

Tony Trow, president of Soap Wizards, talked about how an increase would not only affect his business but his home as well.

“I think it was too much, too fast, and I think it ought to be rolled back,” Trow said.

John Harrington, facilities engineer at Bridon Cordage, said a rate increase would have a “serious impact” on Bridon Cordage’s ability to do business and it would ultimately have a large ripple effect.

Harrington said it would make it more difficult to price products competitively. He noted if the company were to expand a product line, it would have to look at expanding somewhere else.

Scott Drzycimski, manage of customer communications with Alliant Energy, said while he recognizes that rates are important for businesses, he also thinks reliability is an important piece of economic development as well — something Alliant Energy is always working toward.

He said most of the expenses included in the rate case recover the investments the company has made in its Minnesota system in the last five years, including infrastructure-type investments the company has made, such as emission control power plants required by the federal government and wind farms to meet state renewable energy mandates. It also includes the cost of service, including lines, poles and substations that get power to customers.

The city of Albert Lea is one of 14 parties represented by the Minnesota Chamber of Commerce to intercede on the issue, and it is also represented individually by lawyers at Flaherty & Hood.

5 file for Albert Lea School Board; filing open through next Tuesday