The funeral service for Dean Arthur Allen, of Albert Lea, will be held at 10:30 a.m. on Wednesday at First Lutheran Church, Albert Lea. The Rev. Dan Baker will officiate. Interment will be in Graceland Cemetery. Visitation will be from 4:30 to 7 p.m. on Tuesday at Bonnerup Funeral Service, and one hour before the service at the church. 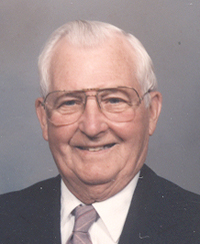 Dean was born on Nov. 8, 1913, to Olive (Forseth) and Guy W. Allen in Shell Rock Township, Freeborn County. He grew up and attended school in Glenville area.

Dean was united in marriage to Helen Jorgenson on March 27, 1943, at the First Lutheran Church Parsonage in Albert Lea. He enjoyed 67 years of marriage. He began working at American Gas/Queen Products in 1942 and retired from there in 1979.

For many years he was a member of First Lutheran Church. He was a loyal member of the Moose Club for 50 years. He was also a member of the Elks Club until their closing. Dean was a long time member of the Albert Lea Family Y. He volunteered for many years as a driver for Ride Services. He enjoyed fishing in northern Minnesota when he was younger and he enjoyed playing cards with his Moose friends and with his family. Dean was an avid fan of the Minnesota Twins and Vikings and enjoyed a good game of checkers. After his retirement, he liked to visit his children who were spread across the United States. These travels took him to Nevada, Arizona, California, Florida, Indiana, Oregon and Texas.

He is survived by his wife, Helen; sons: Dean (Vicki) Allen of Henderson, Nev., Barry (Peggy) Allen of Manchester, Mich., and Mark (Laurie) Allen of Clarksville, Ind.; a daughter Sherry (Roscoe) Guffey of Copperas Cove, Texas; his grandchildren are: Tara (Adam) Jensen of Hayward, Tiffany (David) Nessler of Milwaukee, Wis., April (Jeff) Simmons, Amber (Brent) Charles, Stephanie and Micah Allen all of Clarksville, Ind., Marki and Shaun Guffey of Austin, Texas, Nikki (Corey) Gehlken and Ryan (Christine) Fabry of Las Vegas, Nev., Keith (Shawnty), Kevin and Korey Friday of Manchester, Mich. He is survived by 17 great-grandchildren. Also surviving him are his brothers and sisters-in-law: George and Dorothy Boettcher of Albert Lea and Chet and Vanessa Jorgenson of Scandia, as well as many nephews and nieces.

He was a good and decent man who will be missed greatly by many.