Don was born Sept. 13, 1928, in Owatonna, to Frederick and Catherine (Nolan) Brick. He graduated from Owatonna High School in 1946. Don enlisted in the Army, but broke his back in a car accident while he was at basic training. By 1950 he had his Mortuary Science Degree. In 1952 he returned to Owatonna to work with his dad who was a mortician. In 1954, Don and his brother, Bill lost their father and they became co-owners of Brick Funeral and Furniture Store. 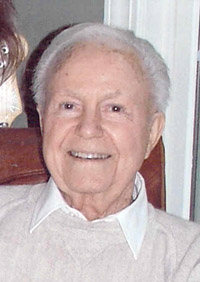 On Sept. 7, 1957, Don was united in marriage to Arlene Teigen at St. Joseph Catholic Church in Owatonna. By 1970, Don and Arlene were parents of three boys and one girl. Don found it wise to own his own business. During that time, he moved his family to Austin after learning that the Meier Wolf Furniture Store was for sale because of the owner’s retirement. When Steve, middle son, graduated from high school in 1980, he wanted to work with his dad in the furniture business. In 1986 Don bought the Herberger Department Store in Albert Lea. John, his oldest son, came back from working in Los Angeles to manage the new Brick Furniture Store. His youngest son, Matt, left college to work with his brother. In 1992, Don again negotiated to buy the closed Damon Department store in Mason City, Iowa. A year later, it too became Brick Furniture Store managed by his youngest son, Matt.

Don enjoyed golf, tennis, playing cards, fishing, some hunting and traveling to many interesting places. When he no longer could do these things, his store, which was his love and his life, became his hobby too.

He is preceded in death by his parents and his brother, Bill.

Don has donated his body to Mayo Medical Science.