If you have a young boy in your family, you probably have seen or heard about the movie “How to Train Your Dragon.” Lisa and I made the mistake of taking young Forrest to the movie in the theater last March, where he proceeded to scream and cry from being scared of the dragons. We had to leave. Movie money is no fun to waste, so we learned our lesson about age appropriateness.

Then “How to Train Your Dragon” came out on DVD in October, and we picked up a copy. Let’s try this again, we said. We wanted to see the movie ourselves anyway.

Again, Forrest was scared to see the dragons, but he didn’t want to leave. He watched it, and the next day, he watched it again. He’d grown up enough to understand: It’s not real!

So nowadays he wants to see the cartoon action movies, even if they have scary moments. Even “Toy Story 3” was quite scary, but Forrest was fine. It’s always nice when he hugs me or Mom to stay safe, though.

The other cool dragon movie is “Dragon Hunters.” It came out in 2008 and must have gone unnoticed, but the animation is something else, even in 2D. It is about two hunters in an imaginative, futuristic world of floating land masses with a medieval setting.

It almost seems like one of those introductory flicks on an action-adventure video game, only it is a full-length film. Order it. 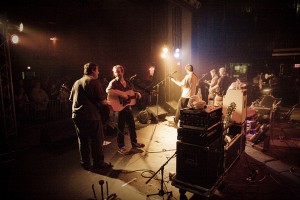 Trampled by Turtles performs at the Masonic Lodge on Dec. 3 in Winona. The band is part of Minnesota’s vibrant bluegrass scene. -- Matt Stengl/Matt Stengl Photography

You’ve probably heard me rave about this band before. I got trampled by these turtles earlier this month with my brother in Winona. I snuck backstage after the show and met a photographer named Matt Stengl, who sent me these great photographs of the concert.

So many adults lose their interest in searching for new music and end up listening only to the radio tunes from their younger days. I say that just because the radio doesn’t play music you like anymore doesn’t mean there isn’t music out there you will enjoy. You just have to search harder for it. 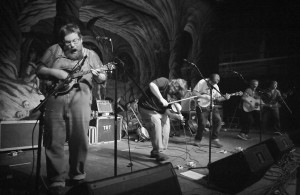 By the way, this isn’t your grandfather’s bluegrass. It has new twists and turns and gets mighty fast at times, like heavy-metal bluegrass, in a way. Some call it speed grass. They play haunting and lovely slow- or mid-tempo tunes, too. At the show, it was great to see Winona State University students enthralled by a musician playing a fiddle or a mandolin for a change. But you could see plenty of grown-ups in the crowd who love this music, just the same. They seemed to know the words better than most of the college kids.

Trampled by Turtles attracts all ages.

The two-headed director from the Minneapolis suburb of St. Louis Park is (are?) coming out with its (their?) next great film, a remake of “True Grit.”

The whippersnappers around these parts might not know that John Wayne won the Oscar in 1970 for his role as Rooster Cogburn in the original 1969 film. So this isn’t just any ordinary remake of any ordinary western.

You probably know that Joel and Ethan Coen are the directors who made the movies “No Country for Old Men,” “Fargo,” “The Big Lebowski,” “Burn After Reading,” “A Serious Man,” “Raising Arizona” and many other gotta-watch movies.

The release date for “True Grit” is today, but I suggest if you haven’t seen the original, get your hands on that one, too. Those old westerns are great, but this one especially.

Al Batt: Each day is a gift you can’t return; make the most of it

Senate Report: What has been happening in the final days of the session