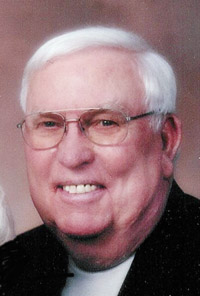 He was born Dec. 10, 1930, in Radcliffe, Iowa, the eighth child of Erwin and Alice (Lunning) Larson. The family moved to Hayward where they purchased a farm in 1936. Erwin attended schools in Hayward and Albert Lea, graduating in 1949 from Albert Lea High School. He married Ruth Sorlien on Feb. 28, 1953, at Oakland Lutheran Church. Erwin, commonly known as “Red,” farmed with his dad until 1966. Red and his family moved into the village of Hayward where he operated the Amoco bulk oil and gas business. In 1969 they moved to Albert Lea, and Red managed the Amoco Farm Center. They relocated to Fort Dodge, Iowa, in 1979 where he managed an LP business until 1982. From there they went to Austin to manage a farm plant until his retirement in 1992.

A member of Hayward Lutheran Church, Red was an avid fisherman and hunter, liked to play golf, travel, landscape the four-acre lawn and work with anything in mechanics or carpentry as a hobby. He never said a cross word. He was always encouraging and lived by what he believed.

He was preceded in death by his parents; brothers: Everett, Luverne, Jewel and Curtis; sisters: Ethel and Doris.

Memorial services will be held at 11 a.m. Monday at Hayward Lutheran Church with the Rev. Katie Fick officiating. Friends may call from 2 to 5 p.m. Sunday at Worlein Funeral Home in Austin and at the church one hour prior to the service. Interment is at Hayward Cemetery. Condolences may be expressed to the family online at www.worlein.com