Food drive was a success 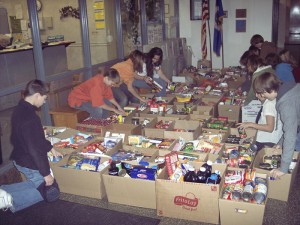 Southwest Middle School held a food drive for the Salvation Army from Oct. 18 through Nov. 18. Food was collected by advisories. The drive was the largest one since Southwest started its food drive. Southwest collected over 2,817 items, which totaled 1,839 pounds.This is what was recorded, though there were several classes that didnÕt turn in their numbers.ÊThe total was estimated at over 3,000 items and 2,000 pounds of food collected. Linda ApplegateÕs advisory helped consolidate food in boxes and then helped carry 79 boxes out to the truck. The school would like to thank all the staff, students and their families for helping them help others in the community. -- Submitted photo