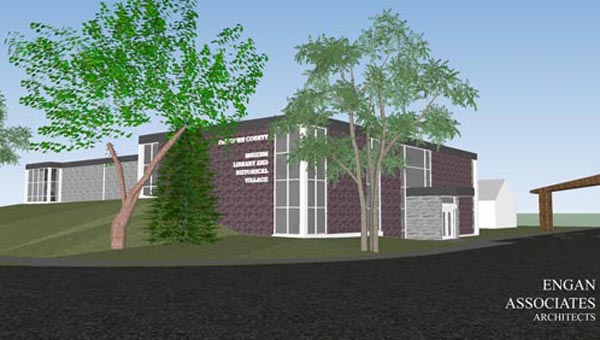 A view of the proposed expansion to the Freeborn County Historical Museum as seen from Bridge Avenue. -- Submitted photo

The Freeborn County Historical Society’s expansion project has moved into a new phase this week with the start of personal appeals to area individuals, businesses and organizations.

The goal is to raise $1.7 million for the expansion, with construction anticipated to begin in spring 2012. About $450,000 has been raised thus far.

According to a news release, the society’s expectations for this fundraising phase include the following:

• Ramping up a three-year pledge program.

• Providing opportunities for businesses and individuals to make year-end donations in 2010, or later years which qualify for tax-deductible status.

Pat Mulso, executive director of the Freeborn County Historical Museum, Library & Village, said there will be personal contacts, mailings, fundraisers and presentations made to reach out to potential donators during this phase of the campaign.

An expansion is necessary to continue to preserve the history of Freeborn County, she said.

“We are very lucky in the aspect that we have a library, a museum and a village all in one location, but in order to continue to do that and preserve the history, we have to be able to care for what we’ve collected,” Mulso said.

Plans for the expansion include a two-story, 10,000-square-foot addition, which would almost double the museum’s size. Plans also include an elevator, handicap-accessible restrooms and an improved entrance and parking for museum visitors.

Space for meetings and events will also be expanded. To meet construction codes, the library will be moved to the lower level in a location close to the new entrance.

Mulso said she hopes the expansion will allow the museum to move into a new era and organize its collection in a more presentable way.

This will also give additional space to allow the museum to keep collecting donations.

“This is the people’s museum,” she said. “It’s not just about Freeborn County, but about the people who have lived here and been in business and been involved in our county.”

Donations may be made monthly, annually or by other special arranged means. Primary emphasis will be to commit to a three-year pledge.

All donations will be recognized unless otherwise requested to be anonymous.

Keith Fligge, who is on the Freeborn County Historical Society’s board, and who is the director of fundraising for the expansion, said individual pledge cards are being developed for ease of receiving contributions. People can also have automatic withdrawals taken out of their bank accounts if they choose.

Fligge is being assisted by Stan Johnson.

As the fundraising is under way, people are encouraged to visit the museum to view the exhibits on display. Fligge and Mulso said enthusiasm for the museum is always increased by personal visits and involvement.

They said achieving the goal of the expansion will not only benefit the community now, but future generations as well.

“The reward for all residents is the preservation of the current and future history of Freeborn County,” a release states.