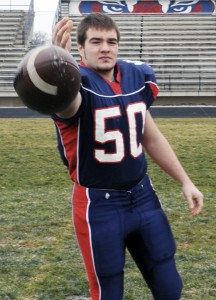 2010 Tribune football Player of the Year

Gaudian excelled on field, in classroom and as role model

Caleb Gaudian is no shrimp.

At 206 pounds, Albert Lea Tigers’ left guard was a dominant lineman on both sides of the football. Relatively small for the positions he plays, Gaudian outmatched opposing lineman by doing the little things, and earned the respect of the Big Nine Conference in the process. 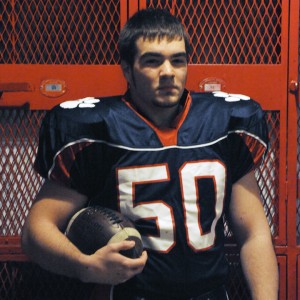 lineman playing on both sides of the line of scrimmage.

Modest and reserved, Gaudian credits his success to his coaches and the talent surrounding him, saying Anderson stresses the importance of getting extension on the line and that has helped him overcome any lack of size.

Spoken like a coach, Gaudian understands the game of football. He’s a student of it, a role he may be even more comfortable in than shedding blocks.

That’s because Gaudian is also an Academic All-Stater and member of the National Honor Society. He wants to play football in college but he also wants to study engineering. Anderson says he should have no trouble doing both.

“Caleb is one of those kids that whatever he does, he does well,” Anderson said. “I think the probability of him being successful in life is almost 100 percent.”

Gaudian also plays piano, sings in the high school’s chorale and helps out at blood drives. Anderson likens him to a fifth-year senior in college, saying he leads by example and that whenever he speaks, everybody listens.

“He walks around our halls and he’s never said a mean word to anybody,” Anderson said. “He’s the most down to earth, classy kid you’ll ever meet.”

A three-year letterwinner for a program that has struggled over the past decade, Guadian played a role in many of the team’s brightest moments. He started when the Tigers upset a top 10-ranked Rochester Century team on Oct. 2, 2009 and never lost to rival Austin while beating them five times.

Even this season, when the Tigers won two games on opposite sides of their schedule, Gaudian kept finding positives.

“This year’s team was like a family,” he said. “Win or lose, we had fun playing together every Friday night.”

Gaudian played on special teams his sophomore year, but moved to a starter on offense and defense for his junior season.

He said last season he enjoyed defense less because he didn’t get many tackles — this year, that changed.

At defensive tackle, Gaudian recorded 70 tackles, the third most on the team, and a team-high six sacks.

After being limited to just two tackles at Faribault on Sept. 27, Gaudian unloaded on the Falcons the second time around, notching a career-best 17 tackles against Faribault in the Section 1AAAA quarterfinals.

Gaudian admits he enjoys playing defense much more this season and those numbers indicate why. But while the senior emerged into arguably the Tigers’ top defender, Gaudian and his coach know his heart is on the offensive line.

“I just love blocking,” Guadian said. “A couple of times (Nielsen) and I drove kids 20 yards. It’s a great feeling saying ‘I’m taking this guy and driving him way the heck out of here.”

Anderson said he loved watching Gaudian play on film, admitting he and the other coaches would marvel at some of the blocks he made.

“He was doing things you see at the college and pro level,” Anderson said. “He would make some incredible blocks.”

Currently, Gaudian is looking at schools such as the Universities of South Dakota and North Dakota and Iowa State University. He hopes to become an engineer, but lay a few blocks in the process.