Funeral services for Leonard Walter Trost, 96, of Glenville will be held at 1:30 p.m. Thursday at First Lutheran Church in Glenville. The Rev. Krista Stokke will officiate. Interment will be at the Greenwood Cemetery. Visitation will be one hour prior to the service at the church. To sign the guest book, go to www.bayviewfuneral.com. 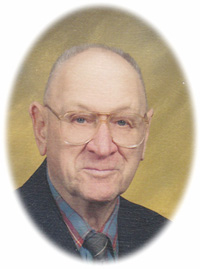 Leonard Walter Trost was born on Nov. 17, 1914, to Walter and Alma (Licht) Trost in Webster City, Iowa. He was baptized and confirmed at Trinity Lutheran Church, Deer Creek Township, Fort Dodge, Iowa. Leonard was united in marriage to Bernita Barger at Cedar Falls, Iowa, on Nov. 17, 1935. He lived on a farm at Clare, Iowa, until 1956, when the couple moved to a farm south of Myrtle. Leonard worked for Speltz Elevator in Myrtle, the Albert Lea Seed House, and in the auto department at Albert Lea Vo-Tech thru the “experience works” program. He also worked for London and Shellrock townships grading roads. Leonard and Bernita moved to their home in Glenville in 1986, and Leonard entered the Northwood Retirement Home in November 2009. He enjoyed spending time with his family. Blessed be his memory.