Lorraine K. Nelson, 89, a resident of Colorado Springs, Colo., since 2009 and formerly of Salida, Colo., Leader and Revere, passed peacefully on Tuesday, Nov, 30, 2010, surrounded by her family. 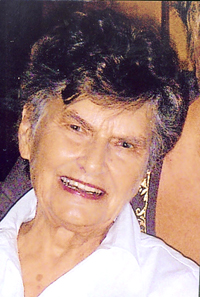 Lorraine Kathleen Erickson was born on the family farm in Ann Township, Cottonwood County, on April 16, 1921. She was baptized and confirmed in the Lutheran faith at Old Westbrook Lutheran Church near Westbrook. She was a 1939 graduate of Westbrook High School.

On Feb. 25, 1942, she married Vernon E. Nelson at Old Westbrook Lutheran Church. Together they ran the family farm near Revere raising cattle and Arabian horses until 1976 when they moved to a ranch near Leader. When they retired from ranching in 1992, they moved to an acreage near Salida, Colo. Vernon died in 1995 and Lorraine later moved to Colorado Springs to be near her daughters.

Lorraine was a woman of strong faith who enjoyed serving her church. Besides Old Westbrook, her walk of faith included memberships at Swan Valley Lutheran in Leader, First Lutheran in Salida and most recently Bethel Lutheran in Colorado Springs.

Lorraine was a devoted wife, mother, grandmother and homemaker who will best be remembered for her beautiful smile, kind heart and gift of hospitality. She was never happier than when surrounded by her loving family and friends.

She is survived by her son, Curt (Susie) Nelson of Goodyear, Ariz.; daughters: Carol Schmiesing of Willmar, Shirley (Tom) Quinn of Fort Collins, Colo., and Candy (Larry) Ouranda of Colorado Springs, Colo. Also surviving are 10 wonderful grandchildren, 15 great-grandchildren and many nieces and nephews. In addition, she is survived by, her sister, Vernette Olson of Westbrook and her sister-in-law, Donna Erickson of Jackson. Lorraine was preceded in death by her loving husband, Vern in 1995; and her brother, Eugene in 2009.

Funeral Services will be held at 10 a.m. Monday at Bethel Lutheran Church, 4925 Farmingdale Drive, Colorado Springs, Colo., with graveside services at 3:30 p.m. the same day at Fairview Cemetery in Salida, Colo. A visitation will be held from 3 to 5 p.m. on Sunday at the Shrine of Remembrance Funeral Home, North Chapel, 5440 N. Union Boulevard in Colorado Springs. Memorials in her name will be given to Bethel Lutheran Church and Pikes Peak Hospice Foundation.