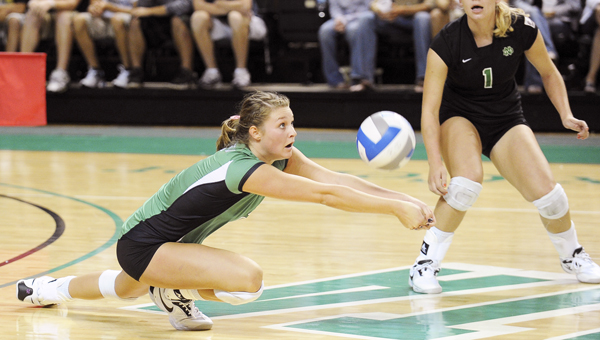 North Dakota’s Annika Smed, left, digs for a ball this past season at the Betty Engelstad Sioux Center in Grand Forks, N.D. Smed, a 2008 graduate of Albert Lea High School, finished the season with 331 digs, giving her 1,009 during her three-year career. -- Photos courtesy of the University of North Dakota

At a school where hockey is king, Annika Smed is queen of the court, and quickly turning the University of North Dakota Sioux volleyball program into one of the nation’s top — one dig, block and kill at a time. 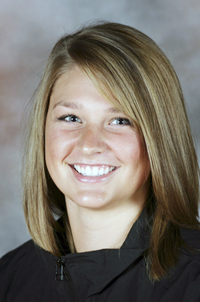 “I’m looking forward to seeing more out of her next year,” Hardee said, of Smed’s budding career. “She has been improving her game all season.”

And as Smed’s talents have grown, so has attendence at the Sioux’s matches, growing from around 500 early in the season to more than 1,000 toward the end.

“Every game we broke another attendance record,” Smed said. “In the community, a lot more people know and talk about volleyball. It’s not just about hockey now.”

That’s because the Sioux finished 25-5 this season and were left out of the NCAA Tournament only because of a five-year waiting period for teams that recently made the transition from Division II to Division I.

Smed will never get the opportunity to play in the national tournament because the Sioux won’t be eligible until 2012. Still, she has taken advantage of every opportunity thus far. 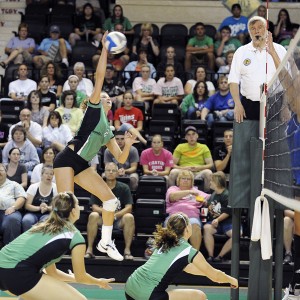 Annika Smed elevates for a kill this past season for the North Dakota Sioux volleyball team. The junior had 308 kills on the season and now has 872 for her career. -- Photos courtesy of the University of North Dakota

“It was a really fun season,” Smed said. “Winning made everything so much better because we worked so hard during the season. Seeing that end result makes playing a college sport that more satisfying.”

The Sioux are 71-19 in the three years Smed has suited up for the team and 24-2 at home in Grand Forks, N.D. She has lost just one conference game in her career, which when finished, will have over 1,000 digs and kills.

“Smed is able to do a lot of things for us,” Hardee said. “She’s a six-rotation player, meaning she plays in the front row and back. She’s our go-to player attacking wise and her defense and serve receive is critical to our success.”

Listed as an outside-hitter, Smed averaged three digs per game in the Great West Tournament, which are big numbers for the position she plays.

Hardee said that type of versatility is what separates her from other players.

Smed and Hardee both agree that the biggest difference in her game from this season to last is improved confidence.

“I want to be the one taking the first ball,” Smed said. “Now that I’m not an underclassman I had to take the reigns because we have a lot of younger girls on our team.”

Hardee said Smed had to accept more responsibility this season, both on and off the court.

“I was expected to have that leadership role so I took it on right away,” she said.

Her GPA is above 3.0 and she was named Academic All-Great West last season.