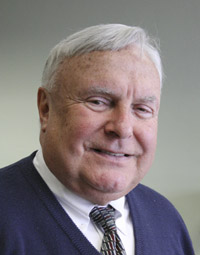 McGarvey, 69, of Mason City, Iowa, will work for the city for three to six months as city officials begin their preparation for a permanent manager. He began his first day Nov. 23.

“I love this work and this profession, so to have this opportunity at this stage in my life in a community of this caliber is really quite nice,” he said. “I’m proud of the opportunity I’ve been given, and I look forward to doing the best I can in my period as city manager.”

McGarvey, who has had more than 30 years experience as a city manager, said he is working a flexible schedule in Albert Lea, and his hours will vary week by week. His schedule will be available with community development assistant Wendy Flugum typically a week ahead of time if people need to make an appointment.

He fills a position vacated by former City Manager Jim Norman, who resigned in September amid allegations that he misused the city-issued credit card for personal purchases. He had replaced Victoria Simonsen, who departed in February for a city administrator job in Colorado.

McGarvey said he is looking forward to helping Albert Lea move forward, and his top priority for the next four to six weeks is hiring a new finance director, a position which has also been empty for several weeks.

Also as a top priority is final budgeting work before the council approves the budget before the end of the year.

Though he still has a lot he needs to learn about this city, he’s hoping this small familiarity will give him one foot forward in his work. He has also known many of the city managers in the area since 1970.

He has a master’s degree in public administration from the University of Iowa, along with a bachelor’s degree in political science.

He said he’s worked in the public sector since he was young because he gets a fair amount of satisfaction out of getting projects done. While he recognizes the city has to provide day-to-day services as well, he gets a lot of pleasure out of being a part of a project from origin to completion.

It’s his hopes in the interim period that he can set the table for the permanent city manager. He anticipated this search would begin in January.

In the meantime, McGarvey will be paid on an hourly basis, not to exceed 40 hours per week, according to the agreement. He will be paid $45 an hour.

McGarvey will also be eligible to receive life insurance benefits and a reimbursement of city-related business expenses on the same basis as other city employees. He will not be eligible for health insurance, vacation or sick leave accrual.