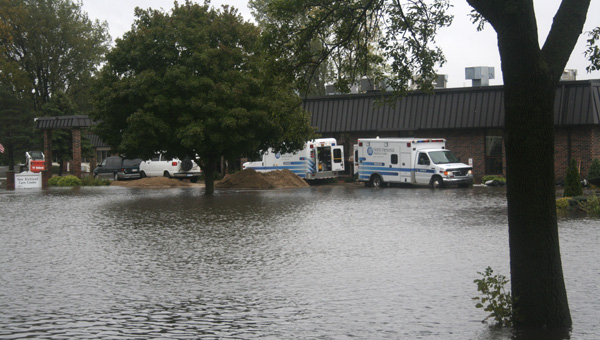 Ambulances and other vehicles line up beside New Richland Care Center in September in an effort to evacuate the premises as a result of flooding. -- Michelle Haacke/Albert Lea Tribune

NEW RICHLAND — Three months after flooding forced residents out of their homes at the New Richland Care Center, the nursing home will reopen.

Pending a state inspection on Wednesday, New Richland Care Center Administrator Mikenzi Hebel said the place could be opened and admitting patients as soon as Monday.

“If they would find something, we would for sure open by the next Monday,” she said.

The remnants of damages sustained when the nursing home was evacuated due to massive flooding back in September are gone.

Fresh paint and new carpeting, along with new cabinetry and countertops in the nurses station are just a few of the changes that will welcome residents back.

“We’re so excited. Everything just looks so nice,” Hebel said. “We not only fixed up what needed to be fixed but improved some things, too.”

Forty-four residents of the care center were evacuated on Sept. 22 due to heavy rainfalls that caused water to flood the building. Despite a massive sandbagging operation with over 350 volunteers, the site suffered damages totalling nearly $320,000.

Four to six inches of water on the floor throughout the entire building caused damage to sheet rock and carpeting. One of the biggest expenses, at the price tag of about $30,000, was replacing 37 heating and air conditioning units, the kind that heat and cool rooms individually.

Construction crews cleaned out wet Sheetrock and moldy areas and pulled out carpet. The entire facility was disinfected, walls were re-Sheetrocked and repainted, and new carpet was installed.

Upon immediate evacuation, residents were transported by buses and ambulances for temporary placement in five different facilities, including the Albert Lea Medical Center, Lakeshore Inn Nursing Home in Waseca and the Waseca Medical Center.

After a recommendation from the Minnesota Department of Health on Oct. 1, the center was closed and residents were permanently placed in centers in Owatonna, Albert Lea, Mapleton, Faribault and Waseca. The reason for this recommendation was that the residents could get proper care plans, therapies and special needs with permanent placement.

Hebel said that the majority of former residents plan to return, minus a few who passed away and one who plans to stay in assisted living.

The decision to close the center also resulted in an estimated 100 staff members who were temporarily without jobs. Hebel said the majority of the former employees, who ranged from full time to part-time and as needed, plan to return.

Hebel is thankful for the community’s during cleanup and recovery.

“Honestly, the thing I’m most proud of is how well our staff and community pulled together,” she said. “It’s been overwhelming how much support we’ve received.”