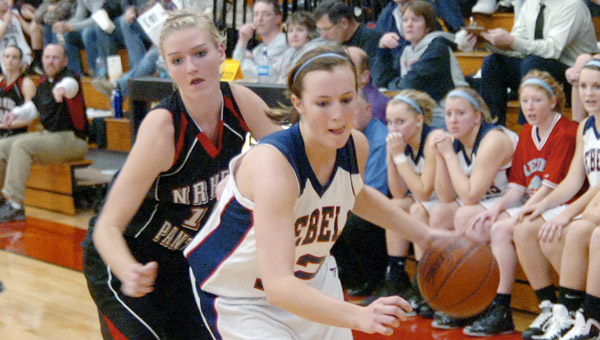 After a thrilling 50-47 overtime win over Bethlehem Academy Tuesday night, the New Richland-Hartland-Ellendale-Geneva Panthers girls’ basketball team knew it would have a tough task ahead taking on United South Central Rebels (4-2 overall, 2-1 Gopher Conference) on Friday in New Richland.

The Panthers (4-1 overall, 3-0 Gopher) used a a great team defensive effort and got a double-double from freshman Carlie Wagner as she recorded 24 points and 11 rebounds to help lead the Panthers past the Rebels 72-59.

“We knew coming into the season USC was the team to beat because they beat us by 18 last year and didn’t graduate anybody,” NRHEG coach John Schultz said. “We figured we had to do something different and that’s what were doing. Were running, rebounding and gunning. We’ll have poor shooting performances but we’ll get the second shot and make up for it with lay-ups and pushing the ball.”

Along with a run n’ gun offense, the Panthers also put on a defensive show that had NRHEG getting several break aways and finishing with lay-ups to put USC down early.

“New Richland played really well,” USC coach Stu Hendrickson said. “They shot the ball really well. When a team shoots as well as they did tonight its hard to defend. They have more than one girls that can shoot and they had two to three girls hitting shots from the perimeter. That was probably the biggest thing in the game, they were hitting shots and we didn’t. They did a nice job of rebounding and they scored a lot of transition baskets in the first half.”

In the first half, NRHEG used their defense to get going as they forced several USC turnovers and turned them into fast break lay-ups to jump out to an 14-7 lead.

After trailing by as much as eight early on in the first quarter, the Rebels got within four when Val Sahr made a two point lay-up to cut the Panther lead to 34-30.

But the Panthers would close the first half on a 5-0 run to give NRHEG a 40-30 half-time lead.

In the second half things got away from USC as NRHEG shot the ball efficiently from the field as the Panthers took a 65-43 lead early in the second half on a Kristina Cole three point jump shot.

“Jade Schultz and Kristina Cole were hitting three’s at key times for us tonight,” Schultz said. “Carlie Wagner was breaking the press very well and finished with a lot of breaks for us.”

Raelin Schue helped NRHEG on the glass leading the team with 13 rebounds, while Wagner recorded 11 for the double-double.

Val Sahr led the way for the Rebels with 19 points, 13 rebounds, five assists and four blocks.

Danielle Koestler had 18 points and Katie Ovrebo finished with 12.

Both teams are back in action on Tuesday as NRHEG hosts Blooming Prairie, while USC hosts W-E-M.