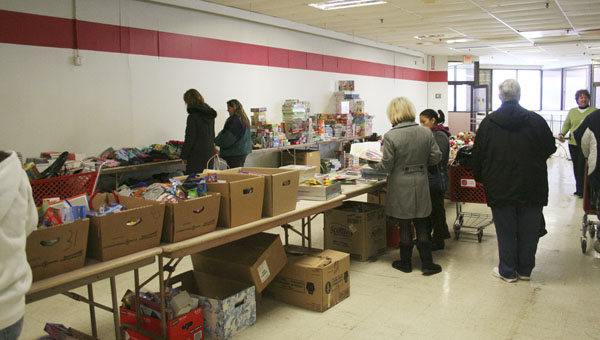 It’s a simple goal, and one that volunteers were hoping to achieve earlier this week at the Salvation Army’s holiday toy distribution event. 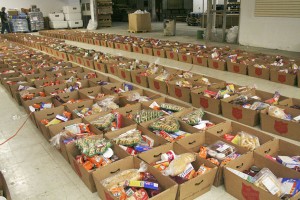 About 500 boxes of food were put together and sent home with shoppers at the 2011 Salvation Army Toy Store Monday and Tuesday. -- Michelle Haacke/Albert Lea Tribune

Despite a snowstorm plaguing Albert Lea on Monday, the parking lot of the former Cub Foods on Broadway Avenue was full of cars as people of all ages and backgrounds filed in and out of the 2011 Salvation Army Toy Store.

This annual event allows families in need to shop for children up through age 16.

Thousands of toys, games and even a few clothing items for boys and girls, grouped by age, lined rows and rows of tables as volunteers assisted those in need — fathers, mothers, grandparents and guardians — down the aisles with carts.

The volunteers and shoppers conversed as they browsed through the toys and clothing, choosing what would bring the biggest smiles to their little ones this Christmas. At the end of the line, where families were checking out, 500 food baskets were made up and each family got a box, while supplies lasted.

According to Salvation Army Capt. Lee Brickson, Christmas distribution coordinator, 800 children were being served in Freeborn County through this year’s toy distribution. Although she did not have a total count of families being served through this year’s event, 150 of the families receiving assistance were first-timers. On Monday and again Tuesday morning, 10 families in need were being shuffled through the toy store about every 15 minutes. 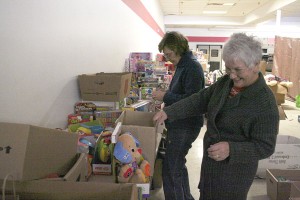 Brickson said based on their calculations, the need is up 78 percent this year over last year.

“These were people giving to the cause last year and things have flipped, they’re needing our assistance this year,” she said.

Families were qualified on a case-by-case needs basis, and filled out applications earlier this month. Although income guidelines do apply, Brickson said having a good income doesn’t necessarily make someone immune from economic hardships.

“Sometimes people make really good money, but had medical problems or a really bad year, where everything broke down all at once,” she said.

Volunteer Kathy Quinn has donated her time to this project for the past 12 years. She said there was no way of knowing how many items were available for those in need. She figured if each child received three toys, that’s at least 2,400 items being distributed.

However, each child also receives a game or activity, a piece of clothing, scarf or hat and a stuffed animal. That’s why every donation counts, no matter the size. 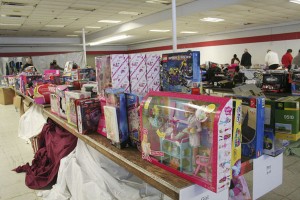 Thousands of toys lined tables at the 2011 Salvation Army Toy Store Monday and Tuesday in Albert Lea. More than 800 children were helped with toys for Christmas at the event. -- Michelle Haacke/Albert Lea Tribune

“Every little gift given is important to those we serve,” said Quinn. “Every donation, no matter how small, is valuable.”

Lt. Col. Rebecca Sjogren with the Salvation Army Northern Division was impressed with the setup for the toy drive in Albert Lea.

“It’s nice that the parent or guardian is able to select the toys and gift items, rather than having those pre-bagged,” she said. “That makes it more meaningful. They are the ones who know the children’s motor skills and favorite activities.”

“This year, there has been a decline in dollars and the number of people needing help is increasing,” he said. “I’m trying to stay positive but realistic with that trend.”

According to Capt. Jim Brickson, pastor of the Albert Lea Citadel, as of Wednesday, funds raised from bell ringing in Freeborn County were still about $11,000 shy of its red kettle goal and nearly $55,000 is still needed in meeting the overall goal of $186,000. The last day the Salvation Army will collect funds for the Christmas effort is Dec. 31.

Hours for bell ringing were still available, as well, and volunteers could sign up by calling 373-5710.

Lee Brickson wanted to thank the community for its participation and donations toward the toy drive. The items were collected through Angel Trees at various locations in Albert Lea, along with Toys for Tots bins at Hy-Vee, Shopko and Walmart, just to name a few. Walmart also made a $1,000 donation.

Donations were also received through an online Angel Tree program sponsored by JCPenney and UPS.

In addition, Larsen’s Construction donated the use of the former Cubs Food building and countless volunteers donated their time setting up, organizing and helping as shoppers.

“Everybody has times where they need help,” said Brickson. “We can’t take those problems away the rest of the year, but for just one day, we can take their problems away and they can feel like normal on the holidays.”