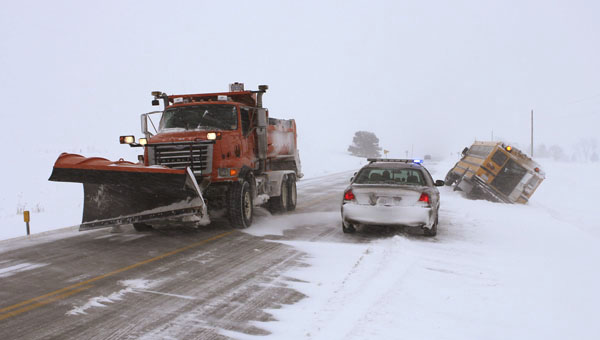 A snowplow pulls up to the site on the Bath Road on Monday during a snowstorm where an Albert Lea school bus slid off the shoulder and into the ditch. A short bus came and took the children back to town. A Freeborn County sheriff's deputy waits by the bus. -- Tim Engstrom

No children were injured and wintry weather conditions were likely the cause.

According to Al Wagner of the Albert Lea Bus Company, children were on the bus when it  slid into the ditch. He said there were no injuries to the children or damages to the bus.

Eric Hudspith, director of facilities and transportation for Albert Lea schools, said that a short bus was on the scene within 10 minutes and the children were evacuated out of the back door so they did not have to step into the ditch.

“The children were put on the other bus quickly and got home safely,” Hudspith said.

A tow truck was called in to get the bus out of the ditch.

Wagner did not know the cause of the incident, but guessed it was due to either the slick roads or limited visibilities on the edges of the roads.

Video of snowmobile pulled from lake